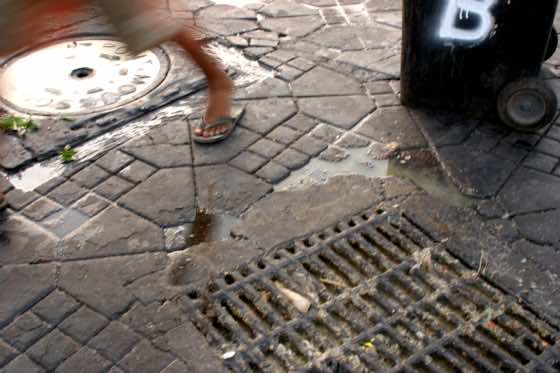 Last night, hundreds of tourists that descended upon the popular La place Jemâa el Fna in Marrakech were greeted with a stinking treat. Right next to the open air restaurant that later served me a small Moroccan salad, potato cakes, and delicious mint tea, (see a recipe for Moroccan Anise bread here) and where Henna painters, storytellers, and snake charmers spend their evenings luring tourists to their small patch of concrete, a blocked drain overflowed. And nobody rushed to the scene to clean it up.

Located in Africa’s Northwestern corner, Morocco has a sewage problem. This is no secret to anyone on the street or on high, and the issue is being addressed with a certain urgency. In the meantime, though, raw sewage continues to run amock not only in poor, rural areas, but also in urban areas that experience high tourist traffic.

The Régie Autonome de Distribution d’Eau et d’Electricité de Marrakech (RADEEMA) was established in 1971 to manage Marrakech’s water and electricity supply. Then in 1998, it was tasked with restructuring the city’s water sanitation facilities and closing injection  points that discharge untreated water into the surrounding environment.

According to Eco2Data, Marrakech produces approximately 90,720 m3 of wastewater every day. With limited infrastructure to cope with it, RADEEMA’s job of ensuring that the surrounding environment is not contaminated with untreated sewage is no easy task.

Poop in the sea

Roughly 60% of the country’s 546 million m3 of wastewater lands up in the Atlantic Ocean untreated, which is harmful to fish – an important domestic and export commodity. And the cost of cleaning up this and agricultural contamination amounts to at least $0.5 billion every year.

In Marrakech alone, it is estimated that 2,000 hectares of agricultural land, which produce cereals and fruit, are watered with raw sewage. Fresh water resources are quickly dwindling in Morocco, as elsewhere in the Middle East and North Africa region, particularly in the drier, southern parts of the country, so farmers are resorting to what resources they do have.

So, what’s the solution to this sh#tty problem?  Under the Horizon 2020 program spearheaded by the European Union, which has contributed 90 million euros towards Morocco’s national sanitation program, 34 high level wastewater managers and decision makers attended a training program in Rabat earlier this year. There they were exposed to best practices that are expected to be passed (and hopefully not flushed) down the management chain.

The country has a long way to go, but unlike Egypt, for example, where raw sewage flows freely into the Nile river, Morocco’s government has a plan.

According to Global Water Intel:

In 2005, Morocco only treated 10% of its municipal effluent, despite the fact that 70% of the population was connected to the sewerage network. Faced with mounting pollution problems, the country launched a national wastewater strategy, Plan National de l’Assainissement (PNA), with the longterm objectives of treating 60% of effluent and connecting 80% of the population to the sewerage network by 2020.

Tonight, I’m going back down to the square to see whether I can eat my dinner in a stench-free environment!