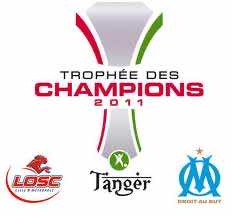 TANGIERS, Morocco, July 27 (Reuters) – Olympique Marseille pulled off a stunning come back to beat Lille 5-4 in France’s Trophy of the Champions having been 3-1 down with five minutes to go on Wednesday.

Forward Andre Ayew scored a hat-trick for Marseille (71, 90 and 90+5) in an incredible encounter in the traditional curtain raiser to the French season played in Tangiers.

Double winners Lille looked very much at home early on with Florent Balmont opening the scoring after nine minutes.

Belgian winger Eden Hazard, who Lille have managed to cling on to despite interest from a raft of top European clubs, doubled their advantage just before the hour.

Rudi Garcia’s Lille have been busy in the transfer market following last term’s shock success and key new signings Dimitri Payet, bought to replace Gervinho who has joined Arsenal, and midfielder Benoit Pedretti slotted effortlessly into the side.

Marseille, playing in the match courtesy of finishing second in Ligue 1 last term, started with new recruit Alou Diarra in midfield and looked to be floundering until Ayew’s first.

Marko Basa’s injury-time goal for Lille sandwiched between Ayew’s second and third further complicated a mad end to the game. The French league season starts a week on Saturday.