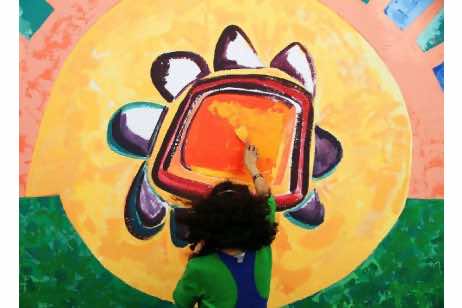 As Sanae Sarghini reaches up to put the finishing touches to her mural near the ramparts of the old town of Assilah in Morocco, a gust of wind suddenly knocks her pot of green paint off the ladder on which she is balancing. It falls spilling an emerald stain over the cobbled street. “Don’t worry, “she laughs lightly. “I can get a cloth from one of the neighbours round here. I just have to knock on the door.”

The simple confidence that a friendly neighbour will provide something to clear up the mess is repaid immediately, not just with a mop but with a helping hand. Nothing, it seems, can stain the traditional kindness and cooperation of Assilah’s people, especially when it comes to the Moussem or cultural gathering that happens once a year in this beautifully preserved seaside town.

Over the past 33 years painters, musicians, poets and simply arts groupies have gathered to enjoy the freedom of a creative atmosphere with little bureaucracy and lots of practical support. Yet the cultural success has been more than matched by social improvements that the community has come to associate with the festival.

It all began with the determination of the mayor of Assilah, Mohamed Benaissa, who saw the potential of making arts the basis for reinventing and renovating his rundown hometown. “Back then the streets weren’t clean and there was rubbish on the beach,” he explains. “But I think that culture is a far better resource than those resources we think of as bringing wealth.”

The transformation began with embellishing the walls of the old town. Prominent artists from around the world were invited to hold painting workshops so that the children of Assilah could learn how to hold a brush and apply paint in a meaningful way. At the same time, brigades of children were paid pocket money to go out and clean up the beaches on a regular basis.

“This implanted a sense of pride in our city,” the mayor tells me. “Seeing their walls painted by foreign artists made them realise that they have something precious here.” And precious indeed it is. The medina is now a spotless labyrinth of winding streets lined with whitewashed houses. The soothing sound of the Atlantic is never far away and crowds gather on the ramparts to watch the glorious sunsets after viewing the murals.

One of the main attraction of this year’s artistic outpouring are the larger-than-life clowns of the Japanese artist Akemi Noguchi. “I have lived in Paris for over 25 years,” he says. “The circus is a recurring theme of mine.” Visitors pose in front of his two painted clowns to have their pictures taken enjoying the bright colours and a reminder of the thrill of the circus.

Nearby, Khalid Al Saai, a talented calligrapher from Syria, has created what he refers to as his rainbow waves. A complex study of shape, shade and meaning that reflects the movement of the waves, the tones of Assilah with its shaded streets and words that evoke time and place.

Each year the festival invites a special guest of honour. In 2010 it was the UAE, and this year it is the Kuwaitis who bring their music, poetry and artistry to the town. Performances are held in the Prince Bandar bin Sultan library and, along with their own traditional music and dance, the Kuwaitis participate in collaborations with Moroccan performers.

Mai Alnouri, a Kuwaiti painter who has come to Assilah for the first time, is absolutely delighted that her work has begun to incorporate new, brighter colours. “I love being here in this place,” she declares. “I would like to buy a house here. The atmosphere is amazing.”

Upstairs in one of the larger rooms of the palace, the French embroiderer and designer Martine Dauvergne is encouraging the women of Assilah to hone their skills with needle and canvas. She is teaching her pupils new stitches while at the same time learning the multitude of what she refers to as “les points Fassis” – the traditional stitches that come from Fez.

“We are working on a tapestry of Assilah that will be displayed in the new contemporary art museum,” she says. “I am hoping that we can devise a way of giving year-round employment to these women.” The embroidery class is just one of the offshoots that will provide employment for the townspeople.

The new museum, still in its planning stages, will be the first of its kind in Morocco. And Benaissa, who is himself a photographer, is delighted that the yearly collaborations are bringing tangible benefits to his town. “With funds from Qatar, Saudi Arabia, Bahrain, the UAE and Kuwait we have built social housing, a new school, residences for the elderly, a hospital and a new, wide road.”

Although there are a few tall buildings dotted around the bay, the town is still unspoilt. And its residents want to keep it that way. “We are always having to fight against the greed of developers,” says the mayor. “The risk of turning into a Torremolinos is there. But so far we have managed to preserve the nature of our town and not allow it to be swamped with lots of construction.”

Investors may be prowling around, looking for ways of cashing in on the success of the cultural gathering, but for Sarghini, who first came to Assilah 20 years ago as an apprentice, the town is above all a place for creative spirits. “We are so lucky to have this place where art rules,” she says. “If we can keep it a sort of family affair where artists from around the world return year after year because they like it so much, then no one will dare spoil it.”