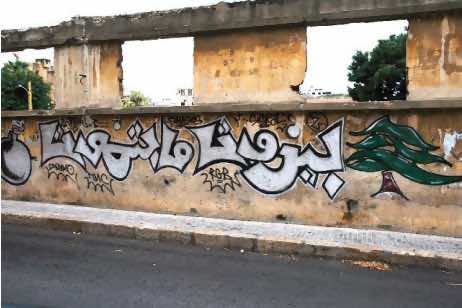 For centuries, calligraphy has been viewed throughout the Islamic world as a spiritual and artistic discipline. According to an impressive new book on the origins and development of Arabic graffiti, the finely wrought characters of this time-honoured devotional tradition also form the roots of a newer strand of secular art proliferating across the Middle East.

Curated by the Lebanese typographer Pascal Zoghbi and the Berlin-based publisher Don Karl, Arabic Graffiti traces the evolution of Middle Eastern street art, from its earliest commercial and political manifestations to the global creative movement it is now becoming.

The editors’ theory is that Arabic graffiti culture may be in its infancy, but the Middle Eastern region’s history of social upheaval and textual illumination provides fertile soil for innovation. This idea certainly holds water when one considers the sources of the work anthologised. As Zoghbi explains: “At first we considered documenting graffiti in every country of the Middle and Far East using Arabic script, but we quickly noticed that while a powerful graffiti scene exists in places such as Lebanon, Tehran and Palestine, it is still shy or totally absent in other nations.”

Recognising these limitations early has allowed both men to provide an ambitious and sharply focused primer on a fascinating and engaging subject. Moving through introductions to Arabic script and modern calligraphy and sections such as “The Art of Resistance” in the Palestinian territories, the structure is well thought-out and cohesive, mirroring the book’s central thesis and striking a happy balance between foundational instruction and conceptual analysis. Given the considered nature of the narrative, it is however, a small disappointment to find that the same diligence was not applied to translation and editing. While many of the contributions are made by expert voices, tangled syntax frequently distracts from the ideas they seek to convey. Still, the joy of a book such as this is that even if the words occasionally leave a few gaps, the imagery is up to the task of filling them in.

While Karl’s experience as a graffiti artist and love of the medium add vibrancy to the project, Zoghbi’s involvement lends both academic and professional credibility. In addition to teaching at the American University of Beirut, his type-design company, 29 Letters, is among the best-regarded in the region. Responsible for corporate identities for clients such as Qatar’s Mathaf Museum and the Abu Dhabi Authority for Culture & Heritage, it is possible to see his work as a bridge between the ancient and the modern, the artistic and the commercial.

Fittingly, Zoghbi’s first chapter turns its attention to the Middle Eastern tradition of “Calligraphic Shop Signs”. Centred largely on his native Lebanon, a written introduction recalls a time when Arab streets were liberally adorned with bright, hand-painted hoardings. While these reminiscences are touching and evocative, the accompanying images are even more revealing. Capturing the weathered paintwork of Beirut chemists and Tripoli tailors, the author’s dimly lit photographs conjure a bustling cityscape, filled with family businesses and artisanal signage – one that has now all but disappeared under the homogenous Plexiglass and strip-lighting of global chain stores.

According to the Saudi-born graphic designer Talah F Saleh, though, Lebanon’s stories continue to be written on its walls. Concentrating on the use of stencils and slogans by the nation’s many competing political parties, her chapter, “Marking Beirut”, examines the medium’s capacity to colonise physical space and influence popular discourse. Since the civil war of 1975-1990, spray-painted signifiers have been deployed as an official channel of communication by everyone from occupying Syrian forces to Hizbollah and the Christian Phalange. From this perspective, graffiti can easily be interpreted as a divisive and destructive force. To Saleh, however, it also provides a living document of conflict, mapping its borders and describing its realities with a visceral immediacy rarely achieved in historic accounts.

While sectarian propaganda still accounts for a large percentage of Lebanon’s street art, Zoghbi’s next appearance offers a colourful counterpoint, explaining how a climate of relative political stability and the development of a small but influential hip-hop scene have combined to make Beirut the spiritual home of Arabic graffiti. “As with most Lebanese design styles and trends, the first Lebanese graffiti was heavily influenced by [the West],” he writes. “The tags and drawings were done in English and French, and the letters had no link with Arabic calligraphy whatsoever.” Yet over time the city’s artists – including such names as the Red Eyed Kamikazes, Ashekman, RGB and Fres – have slowly established a diverse yet uniquely Lebanese aesthetic, fusing the fluid loops and futuristic shading of western designs with Arabic characters and motifs.

Across several pages numerous colour plates offer a showcase of the city’s talent. Then, in a chapter named after Beirut’s most famous piece of graffiti, one writer revisits his own work. During the Israeli bombardment of 2006, Siska teamed up with the visiting French artist Prime, both men taking inspiration from the way local rap groups were beginning to incorporate the Arabic language in their lyrics.

Riffing on just one word, they created an increasingly elaborate sequence of slogans across the city, the strongest of which is a large mural on the border of the Gemmayze and Achrafieh districts. Translating as “Beirut Never Dies”, the piece’s chrome and black script makes a proud and subversive statement, expressing both defiance and hope for the future. “All the messages were centred around the word ‘Beirut’,” he writes. “The outcome of the different pieces we wrote was a series of messages for the city and its inhabitants using the same means that political [parties] used to. Usually political messages and signs were used to divide the city … but our idea was to unify – one message for all, one city for all.”

Since its inscription, this phrase has been copied by other artists, appropriated by a number of opposing political parties, used as the name for a cultural festival and even reproduced on a line of designer clutch bags. Its creator has also fared well, forging a career as a filmmaker and participating in shows at a variety of venues, including London’s Tate Modern. Of course, this kind of upward mobility is nothing new. From Keith Haring to Banksy, graffiti writers have long found support in the world of modern art. Profiling practitioners including the Cologne-based Iranian painter Puya Bagheri (Sair 4) and Birmingham’s Mohammed Ali (Aerosol Arabic), Karl and Zoghbi bring together a remarkable selection of work. Some of these artists are most at home crafting mixed-media installations for metropolitan galleries while others have delved deeper into their roots and made the public spaces of Indonesia and the Palestinian territories their canvas.

Although the range of styles is striking, a little reading reveals that many of these men honed their skills in the banlieues of Paris. Accordingly, a certain sense of diasporic continuity is clear, from eL Seed’s painterly scripts to the metallic filigrees and densely textured figurative pieces of Sadhu. But some of the writers also come from western backgrounds and are simply the product of an energetically multicultural Europe. Most astonishing of all are the dazzling neon trails of Julian Breton and LightGraff. Weaving glorious arabesques from LEDs, torches and lasers, then capturing the results via long-exposure photography, these compositions take graffiti’s inherent ephemerality to its logical conclusion. While the average piece of street art survives only as long as external forces allow (be they other artists, municipal authorities or occupying armies), such designs eschew physical existence altogether.

Given the nomadic nature of graffiti’s creators and the circumstances in which much street art is produced, these experiments are both playful and poignant. More importantly, their inclusion in this anthology is testament to the vitality of a burgeoning artistic community. Unfortunately, though, recent events across the Arab world have conspired to make Zoghbi and Karl’s undertaking a victim of its own eager enthusiasm. Despite the book’s thoroughness, it is near impossible not to imagine the kind of volume that could have been achieved had the revolutionary (and, for that matter, counter-revolutionary) art of the Arab Spring featured within its pages. However, to make this observation is to miss the central point

More than just an immersive and involving introduction, Arabic Graffiti offers a strident affirmation of the value of street art in the Arabic-speaking world. Its authors and editors frame graffiti as a complex and infinitely adaptable medium, a vital historical record and a potent influence on contemporary culture. In doing so, they make persuasive cases for its inclusion in the broader canon of Middle Eastern art and for its continued study. And, of course, they’re right. As the renowned Iraqi artist Hassan Massoudy elegantly asserts, classical Islamic calligraphy and contemporary Arabic street art are simply “two daughters of the same parents”: one a conservative, meditative discipline “bound to thousands of years of tradition and knowledge”; the other a forceful and politically charged “dance in front of a wall”.

Dave Stelfox’s work has been published in The Guardian, The Daily Telegraph, The Independent and The Village Voice.