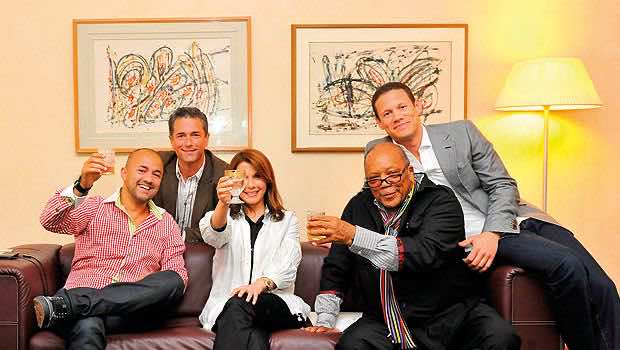 This November, the most anticipated song in the history of the Middle East will be released. Titled “Bokra” (Tomorrow), the song is an Arabic charity single, jointly produced by multi-Grammy winning producer Quincy Jones and UAE-born social entrepreneur Badr Jafar.

“Bokra” (Tomorrow) aims to raise money and help finance educational arts and culture scholarships and projects for children in the Middle East and North Africa. It also aims to serve as a beacon of solidarity and hope for the region in this crucial time.

In fact, “Bokra” is a remake of “Tomorrow” (A Better You, A Better Me) (1989) — Jones’ famous anthem of peace, hope and unity — which was recorded by Tevin Campbell and written by Siedah Garret. Jones chose the song “Tomorrow” for this project because its message of “a better tomorrow” suits this special moment in the history of the region.

The Arabic single aims to recreate the magic from 26 years ago of the iconic recording “We Are The World” — also produced by Jones — which generated tens of millions of dollars to help ease suffering in Africa.

“Bokra” is expected to be greeted with fascination. The highly respected Kadim Al Sahir helped with the Arabic rhythm adaptation and the iconic Majida El Roumi wrote the Arabic lyrics.

Furthermore, the song will be co-produced by Jones and “RedOne” (a.k.a. Nadir Khayat), the Moroccan-born Grammy award-winning producer and songwriter who has worked with a plethora of talent including U2, Lady Gaga, Jennifer Lopez, Akon and Enrique Iglesias. In addition, Siedah Garrett, co-writer of Michael Jackson’s “Man in The Mirror,” is confirmed as Vocal Producer for the recording.

“Bokra” will be recorded by Global Gumbo Group (G3), the joint venture by Jafar and Jones, which was established earlier this year. In fact, it is the flagship charity production of the new venture of which Jones serves as Chairman of the Board and Jafar as its President. The project was launched last May in association with the Mawazine Festival in Rabat, Morocco, where part of the song was recorded.

In this exclusive interview, Arab News spoke with Jafar and Jones to discuss the project further.

Badr, you are an entrepreneur in various diverse fields. What made you decide to take part in the entertainment field?

BJ: I am active in many fields, including energy, logistics and ports, mineral mining and processing, private equity and a number of others. But, something that ties all of them together is a belief in the principles of social entrepreneurship, whereby people from totally different parts of the world, cultures and religions can come together in a common interest and align their interest for common good.

I love all types of music and am continuously fascinated at music’s ability to move and influence people. I am also a great believer of social entrepreneurship. This project is a perfect example of East-West collaboration to produce something worthy and with a positive social impact.

Your partnership is a very interesting one. What made you decide to partner together and what do you hope to achieve?

BJ: Quincy and I met when I was 19 years old, as I was getting my Master’s Degree in Engineering and Astrophysics at Cambridge University. He visited the university to see his daughter who was doing a short course there, and I was introduced to him. From the moment we met, we shared a common vision about the ideas related to social entrepreneurship, and he told me many stories about how he had used music all his life toward social causes. Over the years, we had many discussions about what we could do for the Middle East and the greater Arab world, and these discussions culminated in us establishing the Global Gumbo Group.

QJ: Badr and I speak the same language — spiritually and mentally. That is why I launched the Global Gumbo Group with Badr: To develop multi-media opportunities across all entertainment platforms including music, film, television and digital applications in the Middle East and North Africa. We also want to nurture new Middle Eastern and North African talent and acquire content from the region to introduce to the West.

Why produce this song?

BJ: I have been discussing doing this project with Quincy for almost 10 years. I feel that the entertainment industry has a unique ability to reach out to people and touch their hearts and minds in a very effective way, such as was the case with Jones’ “We Are the World.”

Children are our future, so this song is about a better future for our children. This song comes at such an important time for the Middle East and brings together the region’s leading talent to produce a song of inspiration and hope for all. There is no better time in the region’s history than now for us to be producing a song of this magnitude, and we have the very best people in the industry behind it.

QJ: This song comes at an important time for everyone and brings a message of hope and a better tomorrow for you, for me and for all.

Are the lyrics of “Bokra” (Tomorrow) a word for word translation of “Tomorrow” (A Better you, a Better Me)?

BJ: The song “Bokra,” written by Majida El Roumi, is an interpretation of the song “Tomorrow” and not a word for word translation. Although I have to say that Majida has done a great job at capturing the heart and soul of the original song and keeping the message of “a better tomorrow.”

What were the artists’ reactions to creating such a song?

BJ: All the artists were very committed and enthusiastic in being part of this project — all doing it for no compensation simply because they all believed in and shared the dream Quincy and I have.

Do you see “Bokra” (Tomorrow) becoming the new “We Are the World?”

BJ: Even though “Bokra” (Tomorrow) is a unique song, the messages are similar, in that it spreads positive words of a better tomorrow for us all, by us all coming together as equal stakeholders of our beautiful world.

Qunicy, how good is your Arabic? And, has it been tough overseeing the production of this song?

QJ: I unfortunately do not speak Arabic, but I have Badr who is supporting on that front. In addition, in terms of music, we have no problem, as it does not matter what language you are singing in. Music is the international language that brings us all together.

What are your future plans? Any other Middle East initiatives?

BJ: I believe in the social powers of arts and entertainment, and so I am constantly looking to see how best to use these spheres to create positive social impact. I founded a movie production company, Full Moon Productions, which is developing Middle Eastern content and scripts along with Hollywood producers. We also have a joint venture with Paramount to distribute, through new media, some short movies we are working on. I also feel that we need to further develop theater in the Middle East, which is why I recently launched the Middle East Theater Academy with famous actor Kevin Spacey who has dedicated a lot of his life to working with children and nurturing their creative talents with theater. We already conducted a number of workshops in the UAE and Qatar and will bring the first major production of Shakespeare’s Richard III to the Gulf later this year, with Kevin Spacey himself playing Richard III.

QJ: I believe that one must lead by example. When people get inspired, they also take up the same causes. You cannot give knowledge; you can only take it. I have been using music to spread these messages for many decades, and Inshallah will continue to do so for years to come.

The recording sessions of “Bokra” will be filmed under the direction of Syrian-American producer Malek Akkad (son of the late Mustafa Akkad) who is best known for his popular “Halloween” film series and the acclaimed 2007 film “Made in Brooklyn” as well as by Jones’ son, QD3, a highly respected producer in his own right.

Under the direction of Jones and Jafar, the project’s executive producers, this multi-national team is creating a music video for the song as well as a behind-the-scenes documentary, which will trace the entire “Bokra” (Tomorrow) project. It will incorporate footage from various countries in the region where artists involved in the project will be performing.

“We are planning for a major launch of the song and music video this November. We will be hosting a major exciting event, which we will announce very soon,” said Jafar.