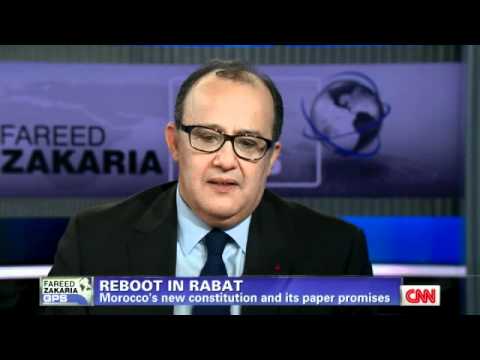 Monday marks six months since Egypt’s protesters took to Tahrir Square. While that country’s leader, Hosni Mubarak, was toppled, the wider Arab spring has turned into a long summer of attrition in Libya, and Syria, and Yemen.

One country, on the face of it, seems to be doing something right. The Kingdom of Morocco recently approved a new constitution that gave significant freedoms to its people. But will these paper promises be fulfilled?

Morocco is a monarchy with an elected parliament. Its foreign minister, Taieb Fassi Firhi, joined us on this week’s show. Below is an edited transcript of our conversation.

Fareed Zakaria: When you read the constitutional reforms that were approved by I think 98 percent of the people in a poll, it sounds as though you’re on the road to a constitutional monarchy almost in the European style. The king retains certain powers on paper, but it seems that it is going to be an elected prime minister who will become the working head of government. Is that going to actually happen?

Taieb Fassi Firhi: It will indeed happen because we were prepared for that and because, also, I think that the constitution of Morocco is a constitution 2.0. Yes.

Fareed Zakaria: And you’ve been reforming for decades.

Taieb Fassi Firhi: For decades and maybe namely since now 12 or 15 years.

Fareed Zakaria: How do you ensure that the powers that the king has on paper are not abused or not used excessively? You know what I mean? Because the king still retains all kinds of –

Taieb Fassi Firhi: All political parties decide together to maintain two specific functions for his majesty. First, as commander of the faithful. The second role, as head of state, is the possibility to manage the army, because our army is professional, not political.

But in all other fields, it’s open for the competition between political parties. And the head of state – the head of government, chief of executives –  will have the possibility to manage the country in terms of orientation, social economic evolution.

Fareed Zakaria: You talked about the king’s role as the commander of the faithful. He is supposed to be a descendant of the Prophet.

Fareed Zakaria: You know, he has this long lineage of 14 centuries.

Fareed Zakaria: What I’m struck by about the radical Islam in your country is, even the Islamists are moderate by comparison. I mean, your Islamist movement is headed by a woman, and you are training women preachers, right?

Taieb Fassi Firhi: Exactly. Exactly. When I talk about the evolution during the last year, before the Arab spring, one of the reforms concerned the religious field, and, in this context, we want to maintain our Islam, but we want to avoid that the religions interfere in political issues.

Taieb Fassi Firhi: Personally, I didn’t feel that. Sincerely. And even the council of the Gulf countries, the cooperation, invites Jordan and Morocco to join them.

Taieb Fassi Firhi: We can interpret also in the different way, is that maybe they want to share with us our own experience in terms of democratizations. But I think that it’s most strategic, and I hope that we will have a strong partnership with the Gulf countries because we need a new Arab league.

Fareed Zakaria: Morocco has another unusual aspect to it, which is that you have had a history of actually friendly relations with the Jews.

Fareed Zakaria: With that background, are you hopeful at all that there will be some breakthrough on the Arab-Israeli front?

Taieb Fassi Firhi: Morocco played the role since a long time, and Morocco in 1985 desired and expressed that Israel have to exist and to be recognized by all Arab countries. And we play a role as facilitator, as mediator.

Now, we don’t have a friend – a friendship or relation with Jews. Jews are a component of the Moroccan society. And this new constitution recognizes that.

Fareed Zakaria: So, let me ask you, if these reforms are successful, if the constitution is enacted in the way that – and implemented in the way that – that you say, in all likelihood, in a few years, there will be an elected prime minister wielding real power, and your position, the foreign minister, will not be held by a diplomat like you, but by some politician.

Taieb Fassi Firhi: That’s true. It’s open and it was open in the past. But we see that, you know, in many countries, naturally, the importance of the political legitimacy in the cabinet then with the legitimacy in the present people, sure. You’re right.

Fareed Zakaria: So you’re reforming yourself out of a job?

Taieb Fassi Firhi: I hope that I will continue to play – to deliver, to give thanks to my humble experience, the best we can for my country, because this country is a splendid country.