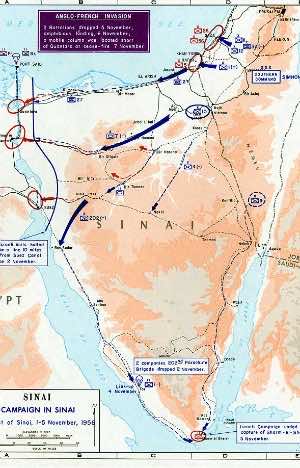 In late October 1956, British and French forces aided Israel’s seizure of the Suez Canal from Egypt. In March 2011, an allied force including British and French forces intervened in Libya to establish a no-fly zone and protect rebels from the ruling Gaddafi regime. Half a century apart, these actions in North African defined trans-Atlantic defense. The Suez Crisis heralded an era of American leadership and action, while Libya has shown that, though powerful, America intends to rely on its allies to carry larger burdens, and take responsibility for their own regions. America once drove and financed western security, but due to fiscal shortfalls and a decade of conflict, it no longer intends to guarantee European security.

In 1956, the once-powerful European states were still weakened from the world war and faced forceful colonial independence movements. The French lost Indochina in 1954 and the situation in Algeria continued to deteriorate, while the Suez Canal Zone in Egypt was England’s last foothold in the Middle East. After tense negotiations, Egyptian President Gamal Abdel Nasser threatened to nationalize the canal as sovereign Egyptian territory, and in response, Israel, England, and France coordinated an invasion with the pretext of securing the canal for world commerce. They failed to inform the United States of their intent and expected American support or indifference. To their surprise, they received neither.

President Dwight D. Eisenhower forcefully protested the Suez invasion and demanded that foreign forces withdraw from Egypt. Though he had little compassion for Nasser and his regime, Eisenhower intended to support international order and avoid unnecessary international conflicts. He condemned the invasion, saying, “We believe these actions to have been taken in error. For we do not accept the use of force as a wise and proper instrument for the settlement of international disputes.” Israel, England, and France were surprised by the American response and false expectations of support. Their forces began withdrawal from the Suez Canal Zone, and returned control to Egypt.

After the conflict, American authority and consent became pre-eminent in the Trans-Atlantic partnership.  Through NATO, America assured European defense from the Soviet Union and Warsaw Pact, and American priorities were NATO’s priorities. England lost its Middle Eastern influence and decided to influence western and world security through cooperation in its “special relationship” with the United States. Embarrassed and affronted by the perceived betrayal, France took the alternate path and sought to set its own defense priorities. France demanded a restructure of NATO leadership in 1958, and began the withdrawal of its forces from the command in the 1960s. France remained outside of NATO for more than forty years until operations in Afghanistan and officially returned its forces in 2009.

President Barack Obama approved American involvement and leadership of the initial attacks on Libya during Operation Odyssey Dawn, but stressed NATO’s lead in maintaining the continued no-fly zone. Operation Unified Protector continues under NATO leadership, with NATO aircraft conducting airstrikes against regime targets, but American support aircraft still provide the majority of intelligence, transport, and communications capability, and American attack aircraft continue to conduct limited strikes. England has deployed ground attack helicopters and both France and England have deployed limited ground advisors to support the rebels, but support across NATO is waning. Member states have announced they will end their support missions, and NATO countries have run low of precision ammunition and other enablers. Despite a public portrayal to the contrary, America is still leading the action in Libya, even as its government continues to lose public support and struggles to justify the increasing costs.

After decades of American presence and power, the European NATO militaries find themselves unprepared, ill-equipped, and under-resourced to execute substantial military operations, even in the Mediterranean Sea, Europe’s own southern boundary. Europe has withdrawn from Iraq and its governments are planning drawdowns in Afghanistan as the strains of deployments have revealed reduced military preparedness. After decades of an American security umbrella, Europe may have to fight for itself, and Europe is not ready.

On June 10, 2011, American Secretary of Defense Robert Gates praised NATO support and operations in Afghanistan and Libya, but warned of the decreased European defense commitment. He spoke of NATO becoming a “two-tier alliance” and urged member states to re-evaluate their funding and manning commitments.  After a decade of the Long War, and two decades since the end of the Cold War, America can no longer afford, and appears unwilling, to guarantee European security. Gates said:

The blunt reality is that there will be dwindling appetite and patience in the U.S. Congress, and in the American body politic writ large, to expend increasingly precious funds on behalf of nations that are apparently unwilling to devote the necessary resources or make the necessary changes to be serious and capable partners in their own defense.  Nations apparently willing and eager for American taxpayers to assume the growing security burden left by reductions in European defense budgets.

He reiterated American support for NATO and Europe and stated that the alliance has overcome six decades of conflict and disagreements, but also stressed that NATO members must make serious commitments to their own defense.

The Suez Crisis confirmed American leadership in Western defense and defined the security roles of Europe for generations. The Libyan intervention has defined a new defense reality.  After a decade of war in Iraq and Afghanistan, economic recession, substantial national debt, and domestic political stalemate, America appears unable and uninterested in ensuring European defense.  With the rise of regional powers such as China and India, the United States will rebalance its presence in Asia, and continue its reductions in Europe. A new security era is upon us, and an intervention in North Africa has once again defined the rules.

Patrick McKinney served as a United States Army officer and deployed to Operation Iraqi Freedom IV.  He now resides in Alexandria, Virginia. The opinions and views expressed in this piece are his own.