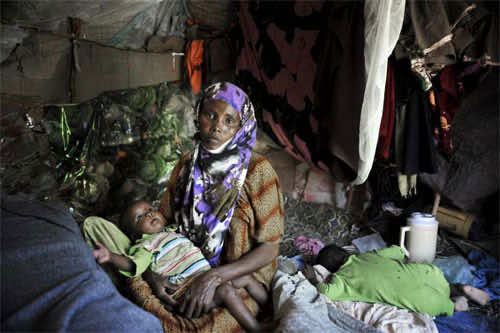 The United Nations refugee agency today revised upwards the amount of funds it requires to effectively respond to the hunger crisis in the Horn of Africa, asking donors to provide an additional $8.6 million on top of the $136.3 million already requested for its humanitarian operations in Somalia, Ethiopia, Kenya and Djibouti.

In Somalia, the additional funds will enable the UN High Commissioner for Refugees (UNHCR) to scale up assistance, delivering relief supplies such as plastic sheeting, kitchen utensils, blankets, jerry cans and high-energy biscuits to some 180,000 people, most of them displaced by a combination of famine, drought and conflict.

The UN World Food Programme (WFP), meanwhile, has welcomed donor generosity, saying that response to its appeal from governments, companies and individuals has been encouraging.

The pledges are in addition to funds already received from many countries before the crisis in Somalia was declared a famine, including donations from Denmark, Finland, Kenya, New Zealand, Norway, Russia, Spain, Sudan and Switzerland.

“We are seeing the world coming together to help curb rising levels of hunger and malnutrition across the Horn of Africa,” said Ramiro Lopes da Silva, WFP’s Deputy Executive Director for External Relations and Resource Mobilization. WFP’s funding shortfall for the massive Horn of Africa operation for the next six months now stands at $252 million, he said.

UNHCR said it will strengthen its tracking of population movements through a network of nearly 80 partners on the ground in Somalia, and increase its presence in areas of displacement, including Mogadishu, central Somalia and areas bordering Kenya and Ethiopia.

“The people of Somalia – both those facing risk, vulnerability or displaced inside the country and the thousands who are outside as refugees – have never needed protection and humanitarian assistance with the urgency that we have today,” said George Okoth-Obbo, the director of UNHCR’s Africa Bureau.

“It is imperative that UNHCR is enabled to enhance its humanitarian activities to provide protection and other life-saving assistance to those being placed at risk. If we can thereby also contribute to people not being forced to have to seek safety elsewhere internally or in other countries, that can only be a good thing,” he added.

UNHCR has to date received $59 million in donor contributions and pledges for the Horn of Africa drought and famine emergency. The agency still faces a shortfall of nearly $86 million between now and the end the year after today’s revision of what is required.

The agency has far this year distributed emergency assistance packages to more than 100,000 people in south-central Somalia, where the drought is most severe. More supplies are currently being distributed to an additional 114,000 drought-affected people.

“All in all, UNHCR aims to reach 400,000 people in dire need of assistance inside Somalia by the end of August,” said Bruno Geddo, UNHCR’s representative for Somalia. “This will alleviate the suffering of some of the most vulnerable people, who do not have the means to travel to get assistance.”

WFP said it has been receiving support from both its traditional government donors and from emerging economies, including countries in the Middle East. Saudi Arabia, for example, has offered $50 million which will be earmarked to help WFP scale up an existing operation in Somalia to provide special food for 600,000 children to prevent malnutrition.

An estimated 11.6 million people in Ethiopia, Djibouti, Kenya and Somalia are facing severe food shortages with rates of malnutrition and related deaths having reached alarming levels in many parts of the region. The UN last week declared a state on famine in two areas of southern Somalia, the worst affected country.