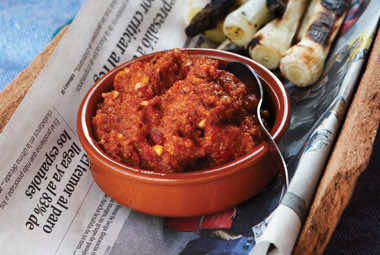 The best part of summer is its fresh, delicious fruits and vegetables, especially ripe, juicy tomatoes. You can hold on to the taste of summer by cooking them into a traditional Moroccan Jewish dish.

I love summer for many reasons, but at the top of my list is its bounty of fresh, local fruits and vegetables. The ever-increasing number of farmers’ markets in the United States—there are now over 6,000, more than double the number five years ago—allow us to put the freshest ingredients on the table. I am lucky enough to spend time on Martha’s Vineyard, where I have a thriving garden from which I pick raspberries, chard, eggplant, peppers, garlic, cabbage, and my favorite, tomatoes.

As I’ve said before, nothing is better in the height of summer than freshly picked tomatoes. This summer, I have noticed a number of delicious ways to extend the season by cooking down the tomatoes. It’s a logical way to preserve the largesse of summer.

Recently, I went to a dinner at the house of my friends Jan Buhrman, a caterer on Martha’s Vineyard, and her husband, Richard Osnos. About a dozen people were gathered for a buffet of Moroccan chicken, baked halibut, and Jan’s rendition of salade juive, a cooked salad of tomatoes and peppers. Jan and I first tasted this dish together a few years ago in Provence, France, when she accompanied me on a research trip for my book Quiches, Kugels, and Couscous: My Search for Jewish Cooking in France.

We had heard good things about Le Mas Tourterons, a restaurant located on the outskirts of the quaint village of Les Imberts. I was especially intrigued to try it as I had heard a rumor that its chef was Jewish. We arrived famished, after an hour-and-a-half drive, to a stone house filled with old wooden beams, antiques, and the enticing smells of fresh food. The chef, Elizabeth Bourgeois, greeted us, and I was so hungry I couldn’t think straight. I just blurted out: “Are you Jewish?”

I was disappointed and felt a little foolish, but the moment was soon forgotten, and Jan and I sat down to a very long lunch. The first course was several delicious cooked salads, and when we tasted the tomato one we were blown away. This ratatouille-like dish, made of tomatoes, peppers, and coriander, was cooked down to a jam-like consistency and was intensely flavorful.

I asked her where she had gotten the recipe. “ Ça c’est la salade juive!” she replied, the Jewish salad, adding that she had learned it from an elderly Moroccan Jewish woman who had worked for her for many years. (Perhaps this dish led to the rumors that Bourgeois was Jewish.)

A few weeks ago, I tasted another, simpler Moroccan Jewish salad at Mémé, a rustic new American restaurant in Philadelphia. David Katz, the chef-owner of this tiny neighborhood place in the heart of Center City, had asked his mother, Suzanne Azran Katz, a native of Casablanca, to take over the kitchen for one night and prepare food from her homeland—dishes like tagine of lamb, couscous with turnips, and merguez sausage—for his local clientele. Mrs. Katz, a slight woman, who lives nearby in southern New Jersey, started the meal with a variety of Moroccan salads, including her delicious salade juive, which she learned long ago in her native Morocco. Her version includes a more recent innovation—tomato paste, which allows her to cook it for a shorter time.

I have found that there are probably as many renditions of Moroccan Jewish cooked tomato salads as there are Moroccan Jewish cooks. They also have various names. In addition to salade juive, they are also called matbucha and salade cuite, or cooked salad. These salads are also easy to prepare and can be made well in advance of serving, which makes them practical for the Sabbath or a dinner party. And they look beautiful.

Another summery tomato dish that I love is a salad of roasted peppers, tomatoes, onions, and garlic; the ingredients are grounded to a paste and served with nuts. In Syria, it is called mahammar and served with pomegranate syrup; in Spain, it is called romesco and local sherry vinegar is added. There are as many romesco recipes as there are versions of salade juive. The recipe I have used here is from Seamus Mullen, the chef of Tertullia in New York, and comes from his forthcoming cookbook, Hero Food, due out next year from Andrew McMeel.

Culinary historians think that this dish was introduced when tomatoes, potatoes, and peppers were brought back to Europe from the New World, ferried by Sephardic merchants who had been expelled from Spain during the Inquisition. Roasted salads historically had been made with eggplants and chickpeas and mashed with a mortar and pestle. The technique was easily adapted to the vegetables from the New World.

I asked Janet Amateau, an American living in Spain who runs a terrific blog, Sephardiccooking.com, if she knew of the specific origins of romesco. “The Romans had many techniques for preserving fish (the Italians have always eaten well!), and this style of sauce (pounded nuts with herbs and spices) did exist in Roman cuisine,” she wrote in an email. While this technique of grinding nuts into sauces is usually attributed to the Arabs, Amateau suggests that the region of Tarragona, located in the northeast of Spain and a formidable citadel in the Roman Empire, gave it the name to indicate it’s a “Roman style” sauce, born of their specific historical identity and culinary traditions.

Eaten scooped up with bread, crackers, or vegetables, romesco and its cooked cousins are absolutely delicious and a wonderful reminder of summer’s fresh offerings.

1. You can either grill or roast the peppers, tomatoes, onion, and garlic. If grilling them, grill over high heat until thoroughly blackened. If roasting, put the vegetables on a large baking sheet in a 450-degree oven for 45 minutes, until very dark. Once the vegetables are grilled or roasted, remove them from the heat and wrap in newspaper to cool. Once they have cooled, carefully peel away and discard the charred skins.

2. In a deep skillet over medium heat, toast the bread and almonds until nicely browned. Transfer to a food processor or mortar and pestle, add the roasted vegetables and dried peppers, and work into a crunchy paste. Add the olive oil and a splash of sherry vinegar and adjust seasoning with pimentón or paprika, salt, and pepper.