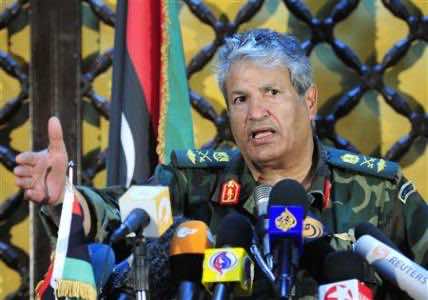 Libya’s rebels say their military chief was shot dead in an incident that remains shrouded in mystery and may point to deep divisions within the movement trying to oust Muammar Gaddafi.

The killing, announced late on Thursday, came as the rebels launched an offensive in the west and won further international recognition, which they hope to translate into access to billions of dollars in frozen funds.

The rebels said Abdel Fattah Younes, who was for years at the heart of the Gaddafi government before defecting to become the military leader in the rebel Transitional National Council (TNC) in February, was shot dead by assailants after being summoned back from the battlefield.

After a day of rumors, rebel leader Mustafa Abdel Jalil said Younes and two bodyguards had been killed before he could make a requested appearance before a rebel judicial committee investigating military issues.

It was not clear where the attack took place. Adding to the confusion, Jalil said the bodies were yet to be found.

Younes was not trusted by all of the rebel leadership due to his previous role in cracking down on dissidents.

But his death is likely to be a severe blow to a movement that has won the backing of some 30 nations but is laboring to make progress on the battlefield.

“A lot of the members of the TNC were Gaddafi loyalists for a very long time. They were in his inner circle and joined the TNC at a later stage,” said Geoff Porter from North Africa Risk Consulting.

“(The killing) is indicative of schisms that have been appearing within the TNC over the last few months … We might be seeing the most egregious examples of the divisions between the former regime members and the original rebels,” he added.

The rebels claimed to have seized several towns in the Western Mountains on Thursday but are yet to make a serious breakthrough. With prospects fading of a swift negotiated settlement, both sides seem prepared for the five-month civil war to grind on into the Muslim holy month of Ramadan in August.

A rebel official said no deal was worth talking about unless it meant Gaddafi and his powerful sons left Libya, while the veteran leader vowed to fight on “until victory, until martyrdom.”

Soon after Jalil’s announcement, gunmen entered the grounds of the hotel where he was speaking and fired shots in the air, a Reuters reporter said. No one was hurt.

At least four explosions rocked the center of Tripoli on Thursday evening as airplanes were heard overhead. The city has come under frequent NATO bombing since Western nations intervened on the side of the rebels in March under a United Nations mandate to prevent Gaddafi’s forces from killing civilians.

The killing of Younes, who was involved in the 1969 coup that brought Gaddafi to power and then became his interior minister, came after the rebels attacked Ghezaia, a town near the Tunisian border held by Gaddafi throughout the war.

By late afternoon, the rebels said they had taken control of the town, from which Gaddafi forces had controlled an area of the plains below the mountains.

“Gaddafi’s forces left the areas when the attack started,” said rebel fighter Ali Shalback. “They fled toward the Tunisian border and other areas.”

Reuters could not go to Ghezaia to confirm the report, as rebels said the area around the town could be mined. But looking through binoculars from a rebel-held ridge near Nalut, reporters could see no sign of Gaddafi’s forces in Ghezaia.

Juma Ibrahim, a rebel commander in western mountains, told Reuters by phone from the town of Zintan that Takut and Um al Far had also been taken in the day’s offensive.

Rebels have taken swathes of Libya since rising up to end Gaddafi’s 41-year rule in the oil-producing north African state.

They hold northeast Libya including their stronghold Benghazi; the western city of Misrata; and much of the Western Mountains, their closest territory to the capital.

Yet they remain poorly armed and often disorganized.

“We can beat Gaddafi now, we have captured more weapons from the Libyan army, mostly rockets and AK-47s,” said Mohammed Ahmed, 20, a market trader turned fighter.