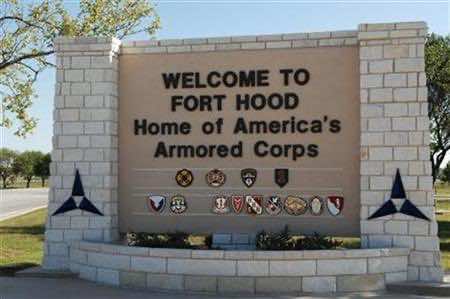 Naser Jason Abdo, 21, was arrested on Wednesday after materials that authorities said could have made a bomb were discovered in his motel room in Killeen, a small city just outside the base.

“Military personnel were a target,” Killeen Police Chief Dennis Baldwin told a news conference in response to a question about whether Abdo planned to attack Fort Hood.

Fort Hood was the scene of a shooting rampage that killed 13 people and wounded 32 others in November 2009. A U.S. Army psychiatrist, Major Nidal Malik Hasan, was charged in that case and will face court martial next March.

Baldwin said Abdo was being held at the Killeen city jail pending federal charges. He was jailed on a warrant for a separate charge of child pornography.

Abdo, a private first class who military officials said was approved as a conscientious objector to Iraq and Afghanistan wars, had been absent without leave from Fort Campbell, Kentucky, since July 4.

Authorities said Abdo was a native of the Dallas area and said they were unaware of any personal connection to Fort Hood or Killeen, where he had only been for “a matter of days.”

Abdo told police about targeting military personnel, Baldwin said without elaborating. “I can tell you that he’s a very dangerous individual and he is where he needs to be.”

The police chief described Abdo’s plans as a “terror plot” and said his targets appeared to be “general military personnel” either in public or on a the nearby Army base.

FBI Special Agent Eric Vasys said there was nothing to indicate Abdo was acting with anyone else. Abdo was arrested after a “concerned citizen” reported that he had firearms and smokeless gunpowder, Vasys said.

“What kind of raised a red flag at the point in time is he asked the manager, ‘What is smokeless powder?'” said gun store employee Greg Ebert, who said Abdo purchased six, one-pound canisters of smokeless powder, three boxes of shotgun shells and one magazine for a semi-automatic pistol.

In June, the U.S. military approved Abdo as a conscientious objector to the wars in Iraq and Afghanistan, but that status was put on hold after he was charged with child pornography in Kentucky.

Abdo applied for conscientious objector status in 2010 because he said Islamic standards prohibited his service in the U.S. Army in any war, military officials said.