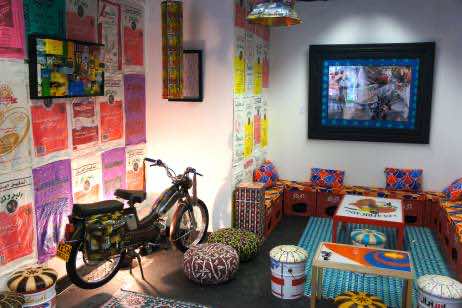 While art aficionados were spoilt for choice by the line-up of events at this month’s Shubbak festival, design and architecture enthusiasts also had plenty to keep them entertained. London’s first festival of contemporary Arab culture featured more than 70 events covering visual arts, film, music, theatre, dance, literature, architecture and design, held over a three-week period from July 4 to 24.

In many instances, it was the interplay between disciplines that proved most fascinating. Hassan Hajjaj’s Le Salon installation at the Apart gallery was one such example – an interlacing of art, design and interior architecture.

The Moroccan-born photographic artist became involved with the festival quite by chance, he says. He had been approached by Adrian Palengat, the founder of the international pop-up gallery Apart, to participate in the annual Apart London Summer Show, which was occurring independently of Shubbak. Palengat had given Hajjaj his first solo commission 10 years earlier and both were excited to be working together again.

“Each year we do a pop-up gallery in London over the summer,” Palengat explains. “This year I secured a huge period space in W1 and asked Hajjaj to recreate the salon he installed in my Portobello gallery in 2001, which had been a huge hit then and which I believed would be a huge hit again 10 years later. I became involved in Shubbak through a friend, who happens to be one of the organisers. She came to the show and saw Hajjaj’s salon, and here we are.”

Hajjaj is best known for his photography, which captures scenes and people from his native Morocco, with a twist. “I have been living in the UK since I was 14 but have always travelled back and forth between here and Morocco,” he explains. “My work is a reflection of that journey, I suppose. In my photography, I focus on people and the similarities between cultures. It’s about communicating to the rest of the world that maybe there’s not that much difference between various cultures and religions.”

For Le Salon, Hajjaj moved into the realm of furniture design, creating an interior out of recycled, everyday objects. Lightboxes were converted into tables, upturned crates were transformed into majlis-style seating, and sacks and cardboard boxes adorn the walls. It’s an installation that visitors can interact with, sit on and touch. It’s bright, in your face and undeniably Arabic – a frenzy of colours, textures and patterns.

“The installation is pure Hassan: welcoming, playful, poetic, eastern and yet western, too – a hard place to leave once you’ve sat down and taken a few breaths of incense,” Palengat says. “I gave Hassan his first major solo show 10 years ago for two reasons. The first reason was that I absolutely adore Hassan’s spirit; he is so full of life and goodwill, a real irresistible force. The second reason was that his work possesses the kind of qualities that I have sought to embrace as a curator since I opened my first gallery. Simply put, his work never fails to engage with the viewer, invariably communicating with them in terms they immediately understand.”

Shubbak visitors hoping to immerse themselves in a more traditional Arabic environment could take part in tours of London’s Leighton House. Situated on the edge of Holland Park in Kensington, the 19th-century building was the home of the Victorian artist Frederic Lord Leighton, an avid collector of Islamic tiles. At the heart of the house lies The Arab Hall, where Leighton displayed his priceless collection of tiles, many of which were brought back from Damascus. Opulence reigns in other areas of the house as well, where gilded ceilings and walls are complemented by peacock-blue tiles by William De Morgan.

Architecture fans also had the opportunity to hear first-hand from some of the region’s leading authorities on the matter. In a talk titled Forward Thinking: The Future of Architecture in the Arab World, Ahmed Al Ali and Farid Esmaeil of the Dubai-based X-Architects joined a high-profile panel of speakers to discuss the development of cities across the Arab world.

Another event, Public Domain: Talk on Public and Civic Spaces in the Arab World, focused on how rapid socio-economic change in the region is affecting public spaces. “The talk tackled an ambitious subject in that it would be impossible to arrive at any consensus or agreement in such a short time,” says Nadim Khattar, the design director of Austin-Smith: Lord Arts & Culture in Abu Dhabi as well as one of the speakers.

“Arabic cities are some of the oldest and newest in the world but can we even talk about the ‘Arab world’ when the countries and cultures within it are so diverse? One of the key points raised was that public space in the Arab world has often been a controlled part of the urban fabric, and given that it often works better as an informal space, there was some debate of how this type of space could or should be designed.”

For Khattar, there was never a question of not getting involved with London’s first festival of contemporary Arab culture. “London is a city with large population of people from across the Arab world. It acts as a hub for Middle Eastern arts and culture and there are few places in the world that have the same amount of institutions and cultural expertise. Events such as Shubbak are important because they provide a forum for ideas, cultural exchange and – importantly for us – the opportunity to get a critical response from our peers and colleagues in the industry on our work and thinking.”

For Hajjaj, Shubbak played an important role in providing Arab artists and designers with much-needed exposure, and was a reflection of changing attitudes towards Arab art.

“There’s definitely growing awareness of Arab art. It’s crossing over to Christie’s and the other big auction houses. There’s interest from collectors that you may not have seen 10 years ago. And there’s a new generation of artists seeing this and responding to it.

“You just have to hope that it doesn’t lead to excess commerciality. The danger is that it becomes a trend and then becomes a fad.”