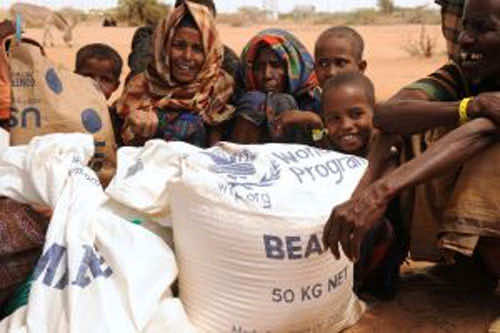 The United Nations today appealed for a further $1.4 billion to save the lives of some 12 million people across the Horn of Africa stricken by a worsening drought, and to stop the crisis from becoming an “even bigger catastrophe.”

“More than 12 million people – in Kenya, Ethiopia, Somalia and Djibouti – are in dire need of help, and the situation is getting worse,” said Valerie Amos, UN Emergency Relief Coordinator and head of the Office for the Coordination of Humanitarian Affairs (OCHA), which issued today’s appeal. “If we are to avoid this crisis becoming an even bigger catastrophe, we must act now.”

The emergency is expected to persist for at least three to four months, and the number of people needing humanitarian assistance could increase by as much as 25 per cent, OCHA said, putting strain on the work of UN agencies.

An OCHA spokesperson said in Geneva that today’s request for funds lifts the Horn of Africa appeal to a total of $2.4 billion, of which $1 billion has been received so far.

OCHA reports that, driven by the worst drought in 60 years, some 1,300 new Somali refugees arrive daily in Kenya, several hundred more flee to Ethiopia and at least 1,000 others crowd into the capital, Mogadishu, fleeing not only drought but continued fighting between Government forces and rebels.

“Women and children are forced to walk weeks under gruelling conditions to reach safety, and are arriving in refugee camps in appalling health, overwhelming the already stretched capacity to respond,” the agency said.

The agency also said that outright famine, declared recently in two areas of southern Somalia, “could spread throughout the rest of the south within one or two months, if the humanitarian response did not increase in line with rising needs.”

Drought conditions in Kenya’s northern and north-eastern districts have deteriorated further after the poor March-June rains. The food crisis is expected to peak in August and September.

In Ethiopia, La Niña weather conditions have diminished two consecutive rainy seasons, resulting in rapidly deteriorating food security in lowlands of southern and south-eastern areas, as well as in parts of the central highlands. In Djibouti, the drought has forced growing numbers of pastoralists and people in rural areas to migrate to urban areas, where food insecurity is rising.

The UN World Food Programme (WFP) reported today that its emergency airlifts were flying tons of specialized nutritional food for malnourished children in Mogadishu and other food supplies in southern Somalia, and it was continuing to feed more than 1.6 million people in Kenya.

The UN Children’s Fund (UNICEF) said six flights and two ships have delivered more than 653 tons of corn soya blend, and about 230 tons of therapeutic food to treat severely malnourished children. It is also building up its food pipeline which already supports 500 nutrition centres in southern Somalia.

The UN High Commissioner for Refugees (UNHCR) said it was working to accommodate some 3,000 people who since Monday settled spontaneously on the edge of Dadaab refugee complex, already the world’s largest refugee camp.

A spokesperson said the refugee agency is “very concerned about the protection of civilians” in Mogadishu amid renewed fighting between pro- and anti-Government forces. An offensive by pro-Government forces has increased the risk to the capital’s citizens as well as the estimated 100,000 internally displaced persons (IDPs) who had recently fled drought and famine in neighbouring regions.

The Secretary-General’s Special Representative for Somalia, today welcomed the Somali parliament’s approval of a new Cabinet and said the new Government must “immediately” tackle the problems facing the country.

Augustine P. Mahiga said the formation of the Cabinet “sends a strong, constructive signal and represents a positive start for the new Somali administration.”

“The new Government must immediately tackle the most critical tasks with the objective of creating a national vision based on a constructive dialogue with all stakeholders and a focus on the delivery of services,” he said.

The UN Food and Agriculture Organization (FAO) and the WFP today issued a joint statement calling for a longer view of the humanitarian situation in the Horn of Africa.

“Beyond the emergency, it will be necessary to put into place the long-term solutions needed to guarantee food security in the Horn of Africa. There will be no sustainable solution to the crisis without measures that enable the countries of the region to become food self-sufficient, develop food crop production and support pastoralism and massively reinvest in agriculture and livestock-raising in the region,” it said.