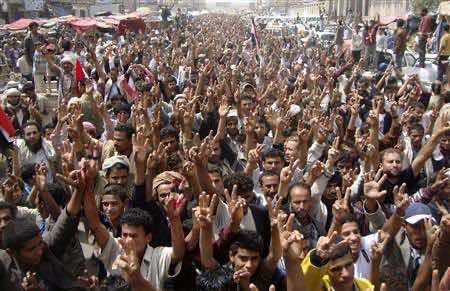 Tens of thousands of people have massed across the impoverished Arabian Peninsula state for six months — a motley crew of secularists and Islamists, separatists and nationalists, tribesmen and urbanites, protesting at 33 years of Saleh rule seen as scarred by repression, corruption and joblessness.

Yemenis had hoped to mimic the impact of Libyan rebels’ Transitional National Council, which has received international recognition. The problem is they have already formed two councils, and loyalties are divided.

“The opposition was never really united except in its opposition to Saleh’s regime. The cracks that are appearing were destined to come sooner or later,” said analyst Ghanem Nuseibeh, founder of Cornerstone Global Associates.

In “Change Square,” where thousands camp out daily in the capital Sanaa, youth groups credited as the driving force of Yemen’s protests have plastered their tents with signs trumpeting allegiance to their “Transitional Council.”

They aim to set up a shadow government in a country facing a growing power vacuum, where a powerful branch of al Qaeda is thriving, since Saleh went to Saudi Arabia to recover from a June assassination attempt. He has vowed to return to rule.

But other tents in Sanaa are conspicuously bare, a sign they back the “National Council for the Forces of the Revolution” being developed by the Joint Meetings Party (JMP), an opposition coalition that once was part of Saleh’s government.

South of the capital, in the protest hotbed of Taiz, some JMP supporters are not only chanting against Saleh, but the youth’s Transitional Council, which they argue weakens their fight against a president clinging to power.

“No to the council of division,” they shout.

Emerging fault lines could trigger fighting among some in a country where perhaps half the population of 23 million own a gun. Clashes have begun to flare near the border with Saudi Arabia, home to the world’s biggest oil fields that foreign powers are eager to protect from Yemen’s growing chaos.

A tenuous partnership between Shi’ite Muslim insurgents known as Houthis and Sunni Islamists of the Islah party has been shattered by violence that has killed dozens in recent weeks.

The United States and Saudi Arabia, both targets of foiled attacks by al Qaeda’s Yemen-based wing, are wary of turbulence ideal for the group’s operations. But they have yet to make decisive diplomatic moves and instead continue to back dialogue and a faltering power transition plan brokered by Gulf states.

The JMP, under criticism from youth protesters for sticking with the plan, accepted three different versions of the deal. Each time Saleh backed out at the last minute.

Saleh now says he will return to Yemen to lead a dialogue and may later call for elections.

Critics accuse Saleh, a shrewd political survivor, of dragging out the political process until the opposition’s latent divisions begin to undermine it.

“The opposition knows Saleh has always survived by playing them against one another. They were wary of falling back into that same old trap,” said Yemen scholar Gregory Johnsen of Princeton University. “So it was a gamble of desperation, I think, forming these councils.”

As the deadlock drags on, conditions are growing worse for most Yemenis facing water, fuel and power shortages. Prices are skyrocketing for a population that cannot afford it. Even before the transition crisis, around 40 percent of Yemenis lived on less than $2 a day and a third faced chronic hunger.

As the wounded Saleh remains resolute, a full victory for the opposition looks less likely and analysts say neither Yemeni council stands much chance of drawing foreign support.

But Transitional Council members said they faced pressure from the thousands of street activists to act.

“The fear of dividing the opposition is no excuse. This council was demanded by the protesters,” said council member Houria Mashour, a fiery woman in her 50s, her hair covered in a colorful veil as she campaigned for the youth-backed body.

To many protesters, forming councils was the only way they could think of challenging the months of political stalemate.

“What else did the JMP want us to do? We waited six months and they did nothing. We gave hundreds of martyrs and thousands of wounded, and the JMP is still living in this delusion of a Gulf initiative,” said Sanaa protester Maysoon Abdulrahman, a supporter of the Transitional Council.

Some JMP leaders insist the vying councils will not cause problems, and could eventually cooperate.

“I don’t think this will deepen divisions as much as start moving stagnant waters,” said Abdelqawy al-Qaisi, spokesman for the powerful tribal leader Sadeq al-Ahmar, part of the JMP.

But Qaisi warned of consequences of protesters’ eagerness to end the deadlock: “The opposition chose the political route, it is a long path but it is safe. The youth may not prefer this.”

“I’m not for any council. We need an escalation, to march to the presidential palace,” he said. “We can’t wait for America and Saudi Arabia to make our revolution for us.”