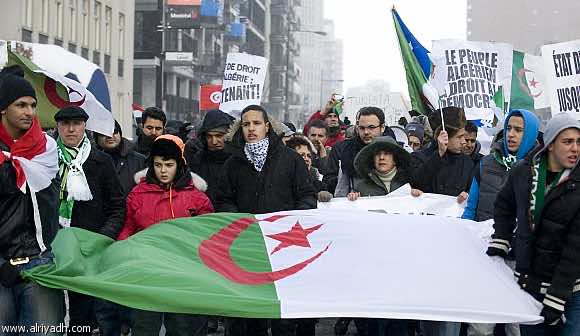 Algeria’s military, which in practice rules the country, is working to blight the “Arab spring” and curb the growth of democracy in the Maghreb. This includes substantial help to Col Muammar Qaddafi in neighbouring Libya.

The United States “is working to ascertain the veracity of these claims [about Libya] which have only just come to light”, a US State Department official told Reuters on Friday. “If true, this would likely constitute a violation of UN Security Council Resolutions 1970 and 1973.”

In fact, however, there is already plenty of evidence to substantiate the claim of Algeria’s involvement in defending Col Qaddafi’s regime.

In the last two weeks, Algeria has denied accusations that a Libyan ship offloaded armaments destined for Col Qaddafi’s troops at the Algerian port of Djen Djen, 267 kilometres east of Algiers.

But Libya’s National Transitional Council (NTC) said the ship, sailing under a Libyan flag, arrived at Djen Djen on July 19 and then the shipment was conveyed across the border into Libya.

Algeria’s support for Col Qaddafi has been thorough and systematic since the Libyan troubles began.

Diplomats from Algiers have worked at the UN, the EU and the Arab League to preclude or limit the internationalisation of the Libyan crisis. Algeria and Syria are the only two Arab countries that opposed the UN’s imposition of a no-fly zone over parts of Libya.

The Algerian authorities contend that the Libyan rebels have close links with Al Qaeda in the Maghreb, and Algeria has neither recognised the NTC nor asked Col Qaddafi to step down. Instead, the Algerian government has endorsed an African Union peace plan that would leave Col Qaddafi and his sons in power.

It should be noted that Abdulhafidh Ghoga, the vice president of Libya’s NTC, has denounced the duplicity of the Algerian regime, which he has accused of backing Col Qaddafi militarily and politically.

The NTC asserted that Chad, Mali, Niger and Kenya were all sending armed forces to support Col Qaddafi and that “there is evidence that the government of Algeria is taking part in this”.

And the Algerian opposition in exile in Europe has alleged that there are Algerian armed forces in Libya. Shamsuddin Abdulmollah, an NTC spokesman, reported that 15 Algerian mercenaries had been captured in western Libya.

There is further corroboration that Algeria has sent proxy forces to help Col Qaddafi. Mario Diaz-Balart, a Republican in the US Congress, has exhorted colleagues to give “serious attention” to evidence that combatants from the Algerian-backed Western Saharan Polisario Front are among the forces fighting for the Libyan regime.

Edward Gabriel, a former US ambassador to Morocco, has said that “hundreds of Polisario mercenaries are being paid $10,000 (Dh36,700) each by Qaddafi” to fight in Libya.

In April the French foreign minister, Alain Juppé, challenged the Algerian regime about its connection to an arsenal that Col Qaddafi’s troops had left on the battlefield, which was discovered by French military advisers to Libya’s rebels.

At times Algerian involvement in Libya has been explicit. When the Algerian parliamentarian Saddek Bouguettaya attended a meeting in Tripoli of Libyan tribes supporting Col Qaddafi on May 8, he described Col Qaddafi’s efforts to remain in power as “valiant and praiseworthy” and condemned Nato for its “bombing of the civilian population”.

Mr Bouguettaya is a member of the central committee of Algeria’s ruling National Liberation Front (FLN) and a loyalist of Abdelaziz Belkhadem, the FLN’s secretary general and the personal representative of President Abdelaziz Bouteflika.

It should be noted that Mr Belkhadem called the Libyan rebels “agents of foreign powers who receive orders from the West”. In addition, Daho Ould Kablia, Algeria’s interior minister, affirmed on a recent talk show that “future relations with Libya would be strained in case the rebels take over power in Tripoli”.

These declarations all indicate that Mr Bouguettaya was not voicing his own opinion, but was articulating the regime’s open support for Col Qaddafi.

These reckless declarations by high-ranking Algerian officials have agitated Washington. Many US congressmen cannot fathom why Algeria would support Col Qaddafi while Nato has made its intentions to topple the Libyan dictator so clear.

What many observers fail to take into account is that the Algerian government fears an uprising similar to those in Tunisia and Egypt, or what is taking place in Syria and Yemen.

Those in power in Algiers remember the October 1988 riots that threatened the military-backed regime, which has mismanaged the country since independence in 1962.

Dr Abdelkader Cheref is an Algerian assistant professor of comparative literature and cultural studies at the University of Connecticut.