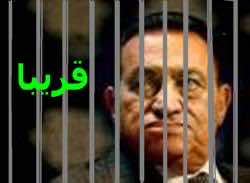 CAIRO (Reuters) – The trial of ousted Egyptian president Hosni Mubarak for charges that include ordering the killing of protesters will take place at Cairo’s Police Academy on Wednesday August 3, the state news agency MENA said on Saturday.

A source close to Mubarak had said on Thursday his lawyer would tell the court in Cairo that Mubarak, who has been in hospital in the Red Sea resort of Sharm el-Sheikh since April, was too sick to attend the session in person.

Many Egyptians view Mubarak’s illness as a ploy used by the ruling military council — which took over after Mubarak’s ouster in February– to avoid publicly humiliating their former commander-in-chief.

Demonstrators camped inTahrir Square on Saturday said they were sceptical Mubarak would show up in Cairo on Wednesday.

The demonstrators, around 150 in total, continued their sit-ins in tents set up in the square despite a large Friday rally that was held to send a united message to the ruling army about reform but from which dozens of political parties and movements withdrew, saying it was hijacked by Islamists.

Prime among the demonstrators’ demands is a swift and fair trial for Mubarak, who is charged with conspiring with former Interior Minister Habib al-Adli in attempting to kill peaceful demonstrators during the 18-day uprising that ousted him. If convicted, the crime could carry the death penalty.

Field Marshal Mohamed Hussein Tantawi, who heads the ruling military council, has decided to form a committee to speed up compensations for the families of protesters who were killed or injured during the uprising, MENA said on Saturday.

The committee will increase monetary compensation for families of dead protesters to 30,000 Egyptian pounds for each martyr from 5,000 pounds, MENA said on Saturday.

Compensations for the families of injured protesters will also be increased based on the degree of injury, MENA said.

Judicial sources had previously said Mubarak’s trial over the killing of protesters might be moved to Sharm el-Sheikh.

An official at the hospital where he is staying said on Saturday Mubarak’s condition was “relatively stable” but that he suffered from severe depression and refused to eat for prolonged periods and refused to deal with psychiatrists, MENA reported.

Protesters camped for weeks in Cairo’s Tahrir Square have demanded that Mubarak be treated like everyone else convicted of a crime and that his trial be held in Cairo, though many have expressed doubts this would take place.

“What we’re waiting for is not the same as what we’re expecting,” said Ahmed Moawad, a member of April 6 Movement who was in Tahrir on Saturday.

“I’m waiting for trial to take place in Cairo,” said Moawad. “Let’s say I was wrongly arrested for something … and (that I was) psychologically distressed. Would they get me a psychiatrist and send me to a seven-star resort? … There has to be justice in dealing with all Egyptian citizens.”

“We see that sit-ins are the optimal way to achieve (our) goals given the clear foot-dragging … by the cabinet and the military council,” Moawad said.

Other demonstrators in Tahrir said they were sure Mubarak’s trial would be indefinitely delayed.

Mubarak’s two sons, detained in a Cairo prison on various charges including graft, will also be tried on August 3 at the police academy, alongside Adli and six of his top aides, MENA cited the head of Cairo’s Appeals Courtas saying on Saturday.

Businessman Hussein Salem, a close confidant of Mubarak who was arrested on an international warrant and is currently hospitalised in Spain, will also stand trial on the same day at the academy, MENA said. Salem is charged with crimes that include squandering public funds.