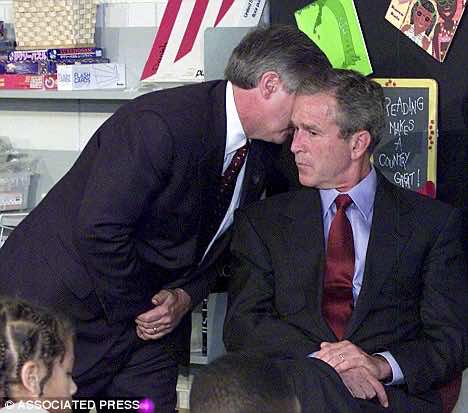 It wasn’t his reaction when he first learned of the 9/11 terror attacks but his lack of one that sparked a flurry of accusations and criticism.

But George W. Bush has finally given an explanation as to why he seemed to have no response when initially told about one of the greatest tragedies in American history – he was trying to project a sense of calm.

In a rare interview about the attacks, the former president told the National Geographic Channel what was going through his mind when he was informed that a second passenger jet had hit New York’s World Trade Center. 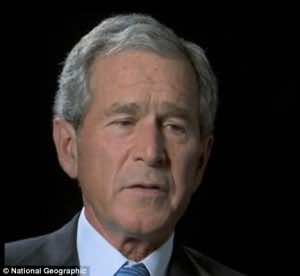 He said: ‘My first reaction was anger. Who the hell would do that to America? Then I immediately focused on the children, and the contrast between the attack and the innocence of children.’

Bush was sitting with a group of children who were reading aloud when he said he saw reporters at the back of the room getting the news on their cellphones, which he described as like ‘watching a silent movie’.

Then his chief of staff Andy Card walked behind him and whispered in his ear: ‘A second plane has hit the second tower. America is under attack.’

He said he realized a lot of people beyond that classroom would be watching for his reaction.

‘So I made the decision not to jump up immediately and leave the classroom. I didn’t want to rattle the kids. I wanted to project a sense of calm,’ he said.

‘I had been in enough crises to know that the first thing a leader has to do is to project calm.’

In the hour-long interview, which will be broadcast on August 28 as part of a week of programmes on the cable network that mark the tenth anniversary of the attacks, Bush also said that visiting the site was like walking into hell.

He said: ‘From the air it looked like a giant scar. But when I actually got to the site, it was like walking into hell.

‘One of my concerns, like the concerns of other husbands and wives, was, “Was my spouse okay? Was Laura okay?” And my second concern was “Were our girls okay?”‘

Hearing from the former first lady, Mr Bush said, ‘was awesome to hear her voice. And she had talked to the girls. And they were secure’.

The programme will also feature archival footage, shot at the Pentagon and in New York days after the attacks, from the George W. Bush Presidential Library, which has never been featured publicly before.

Until now, the former president has never discussed on camera what he was thinking and feeling, and what drove his real-time, life-or-death decisions in the first minutes, hours and days after the attacks.

It is also the first time the former President has discussed the death of bin Laden.

Peter Schnall, producer and director, said of the interview: ‘There were no politics, no agenda as he recalled what happened that day. What you hear is the personal story of a man who also happened to be our president.

‘Listening to him describe how he grappled with a sense of anger and frustration coupled with his personal mandate to lead our country through this devastating attack was incredibly powerful.

‘What surprised me most was his willingness to speak openly, candidly and personally about the events of that day.

‘There were no requests for questions beforehand, no editorial say from the president or his office.’

Mr Bush reflects on the historical implications of the anniversary.

He said: ‘Eventually, September 11 will be a day on the calendar. It’ll be like Pearl Harbour Day. For those of us who lived through it, it’ll be a day that we’ll never forget.’

The interview will premiere in the UK on Tuesday September 6 at 9pm.