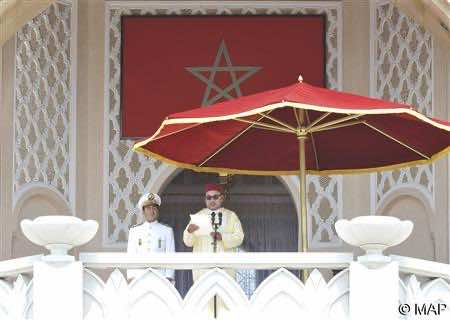 Thousands of Moroccans marched on Sunday to press the Arab world’s longest-ruling dynasty to relinquish more of its sweeping powers and stamp out corruption.

The protests coincided with the holding of a centuries-old Be’ya, or allegiance ceremony, where hundreds of regional representatives renewed vows of obedience to King Mohammed the day after the anniversary of his enthronement.

Morocco’s monarch acted promptly to contain any spillover from pro-democracy uprisings across the region, promising constitutional changes to reduce his powers on March 9, two weeks after protests spread to his country.

A referendum on July 1 endorsed a new constitution. But the changes have failed to end peaceful protests by the youth-led February 20 movement, which is pushing for a constitutional monarchy with the king as a figurehead.

State-run television showed the monarch clad in a traditional cream djellaba robe and riding a horse. He was seen greeting lines of dignitaries who bowed and chanted “May God bless the life of my master.”

“This ceremony reflects the authenticity of the Moroccan people and its unswerving attachment to the glorious Alawite throne,” the official MAP news agency said.

The Alawite dynasty claims descent from Prophet Mohammad and the king holds the Islamic title Commander of the Faithful.

In the capital Rabat, hundreds of protesters chanted the slogan “May God bless the life of my people” and carried placards demanding a “change that marks a break with the past,” according to a Reuters witness.

“This protest is not meant to be a response to the allegiance ceremony. It is our response to the overall political climate in the country,” said Mohamed al-Aouni, an activist from the February 20 Movement, which has held almost weekly protests demanding reform.

“We will continue to press for a parliamentary monarchy, freedom, social justice and dignity,” Aouni said.

About 4,000 people protested in the country’s biggest city Casablanca and about 5,000 in the northern city of Tangier, said local government officials.

“We held the march today to express our rejection of corruption and rituals where people have to kneel,” Hamza Mahfoud, a February 20 Movement activist, said by telephone from Casablanca.

The king chairs cabinet meetings and controls the judiciary, religious affairs and the army. He can dissolve parliament if it proposes laws that do not please him.