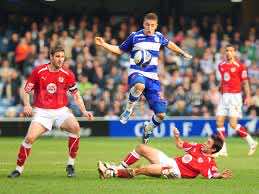 Taarabt was on the brink of a £12million switch to the French giants before Rangers owner Flavio Briatore pulled the plug on the deal.

Midfielder Dyer is delighted the Moroccan international is staying at Loftus Road.

Dyer said: “I have only seen him for a couple of weeks and some of the stuff he is capable of doing is world class. He is going to have a big part to play if we stay up.”