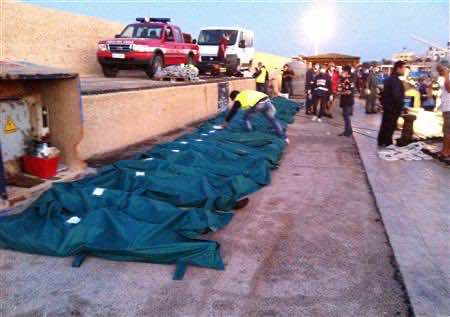 Rome– The Italian coast guard found the bodies of 25 men who were apparently asphyxiated by motor fumes on a small boat crammed with African migrants that arrived on an Italian island from Libya on Monday, officials said.

The boat arrived on the Sicilian island of Lampedusa after a three-day voyage carrying 296 people from sub-Saharan Africa, the latest in a wave of arrivals since a western alliance began a military campaign to oust Libyan ruler Muammar Gaddafi.

Most of the migrants were from Somalia, Nigeria or Ghana, said the charity Save the Children, which spoke to the survivors. Those on board included 36 women and 21 children. Some of the babies were just a few months old, the group said.

“From our initial chat with them, the impression is one of people who have

been tried and shocked by what has happened, because the dead include their friends and acquaintances,” the group said.

“Some of the migrants told us that bombardment made it increasingly difficult to stay in Libya, as well as to leave and reach the ports.”

Hundreds of people have drowned attempting the dangerous crossing from North Africa to Lampedusa, a tiny island off the southern coast of Sicily, as the fighting in Libya has brought down previously strict border controls.

The latest victims were squeezed into the hold of the boat and were already dead when it pulled into harbor with the aid of coast guard vessels, who came to the boat’s rescue some 35 miles offshore, authorities said.

They said others on the boat said the men had died from asphyxiation but a formal cause of death had still to be established. Some people on the boat had also said another man had died on the voyage and his body dropped overboard.

The men were likely dead for 48 hours based judging from the condition they were found in, a local medic, Pietro Bartolo, told the Ansa news agency

Local prosecutors have opened an investigation to see whether any criminal responsibility can be established under laws against aiding clandestine immigration.

Lampedusa, which normally lives off tourism and fishing, has found itself on the frontline of a growing immigration crisis as tens of thousands have arrived from Tunisia and Libya since the beginning of the year.

Libya has long been a popular point from which thousands of African migrants have attempted to cross into Europe.

A deal between Gaddafi and Italian Prime Minister Silvio Berlusconi’s conservative government to send migrants back before they enter Italian waters succeeded in curbing the flow of migrants until the uprising against Gaddafi began this year.

The U.N. refugee agency has said one in 10 migrants fleeing conflict in Libya by sea is likely to drown or die from hunger or exhaustion in appalling conditions during the crossing.