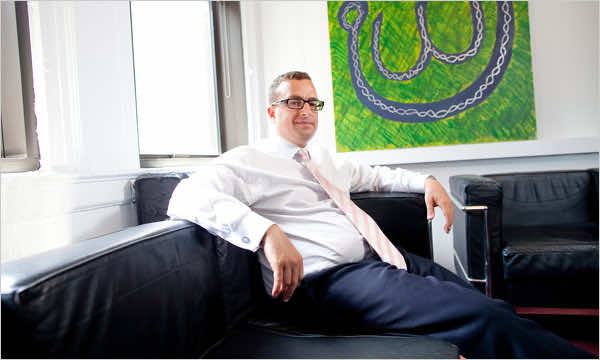 A year after controversy engulfed plans to build a Muslim community center and mosque in Lower Manhattan, the project’s developers are quietly moving ahead: In recent months they have hired a paid staff, started fund-raising drives and continued holding prayers and cultural events in their existing building two blocks from ground zero.

But they have also embraced what they call a slower, more deliberate and more realistic approach to the project, acknowledging it will take years of hard work to determine what kind of facilities Muslim and non-Muslim visitors want and need, to raise money, and to build public support.

That means it could be five years before they even try to begin any physical transformation of the property, now a bare-bones building that once housed a Burlington Coat Factory store. And the Muslim center might never become the 15-story, $100 million edifice that the developers had once envisioned, and that some opponents had labeled a “megamosque.”

When the plans were announced last year, there were angry protests from some relatives of 9/11 victims, politicians and others who said it would be insensitive to build a Muslim institution close to where Islamic radicals attacked the World Trade Center on Sept. 11, 2001. The furor was fanned by Internet-based activists who viewed Muslim influence as a threat and called the project a “victory mosque.” The developers, unprepared for the outcry, were thrown into disarray, trying to defend a plan that was still embryonic.

Sharif El-Gamal, the lead developer, who controls the property at 45-51 Park Place, has spent the past year trying to regroup. He has severed ties with the project’s original imam, Feisal Abdul Rauf. He has crisscrossed the country to attract donors, built relationships with neighborhood groups and Muslim organizations and recruited the aunt of a 9/11 victim to his advisory board — all things he says he should have done before going public last year.

“Everything was backward,” Mr. El-Gamal, 37, acknowledged in an interview on Wednesday in his Chelsea real estate office. “We’re going back to basics.”

Mr. El-Gamal said his vision remained: a Muslim-led community center modeled on the Jewish Community Center on the Upper West Side, where his children learned to swim. It would be open to all, with a pool, a theater and cultural, religious and interfaith programming. And the site, which is already used for Muslim worship, would include a mosque.

He said the ultimate form of the center, called Park51, and its building would be determined after consultation with two main audiences, residents of Lower Manhattan and Muslims who live in New York, New Jersey and Connecticut. Mr. El-Gamal also said he would assess the community response to the events now held at Park51’s makeshift space, varying from art exhibits and yoga and Brazilian martial arts classes to Muslim holiday observances and a discussion for Muslim and non-Muslim children about bullying.

One thing that is not in question, he said, is the center’s location. Legally, he is entitled to operate a religious institution there; the project required no zoning approval, though it was voluntarily presented to Manhattan’s Community Board 1, which approved it in May 2010.

Prayers have been held in the building since 2009, when Mr. El-Gamal and his partners bought it to provide prayer space for Muslims who work downtown and had worshiped for decades in two small, crowded mosques nearby.

The 10th anniversary of 9/11 this fall poses a new challenge for the center. Pamela Geller, a blogger who drove much of the opposition, has called for a protest on Sept. 11 near Park51; her Web site promotes a film, “The Ground Zero Mosque: Second Wave of the 911 Attacks.” The language employed by Ms. Geller and Robert Spencer, another blogger who writes about threats from Islam, is under new scrutiny after their views were cited by Anders Behring Breivik, who confessed to killing scores of people in Norway on July 22 because of his fears of a Muslim takeover; Ms. Geller and Mr. Spencer have denied any responsibility for Mr. Breivik’s actions.

They are not the only opponents. In the campaign for a special election to fill an open House seat serving Brooklyn and Queens, the Republican nominee, Bob Turner, is accusing his Democratic opponent, David I. Weprin, of being insufficiently hostile to the Muslim center.

Mr. El-Gamal said he was disturbed that his project had been swept up in public discussion of 9/11, which he recalls as “an attack on my city.”

“To see that you’re in the middle of causing neighbors or other human beings angst or distress or adding to their grief is not a pleasant feeling,” he said. “At the same time, we had nothing to do with those events, and those events defaced our religion.”

Park51 has not decided whether to hold a formal event on 9/11 or simply mourn and remember in private. “We want to do what is most respectful and appropriate,” said Katerina Lucas, the chief of staff. Ms. Lucas, a recent graduate of the Harvard Divinity School, is one of Park51’s five staff members.

Inside the unmarked building, the center is busy with events that showcase its multiple goals. Throughout Ramadan, the Muslim holy month that begins this week, the space will host nightly meals to break the fast, and other events. This fall, the center plans an exhibit called NYChildren Photography, by Danny Goldfield, a Brooklyn photographer who is trying to take pictures of one New York City boy or girl born in each of the world’s countries. In July, at a preview of the exhibit, a band played and several dozen visitors nibbled snacks and admired portraits of children from Japan, Guinea and Afghanistan.

And last Friday in the building, the planners held a dinner for New York Muslim groups to raise money for the mosque, which will be called PrayerSpace. Fund-raising is being done separately for the mosque and the community center, though the same people oversee both efforts; money will not be accepted from sources that Mr. El-Gamal said did not reflect “American values.” He said he was seeking to raise $7 million to $10 million to finance a “transitional phase” of both facilities.

Leaders of several Muslim community organizations, some of whom were upset last year that they were not consulted about Park51 before it became the center of national controversy, said in interviews that Mr. El-Gamal had mended fences with them.

At the same time, Mr. El-Gamal said he would no longer have an imam as the center’s public face. Personality conflicts and philosophical and tactical disagreements ended his relationship with Mr. Abdul Rauf, whose views were criticized by opponents and whom some Muslims said was out of touch with their concerns.

Mr. Abdul Rauf said last week that he had spent recent months lecturing on tolerance and American Islam and working to establish a Muslim center at the Chautauqua Institution in western New York and writing a book.