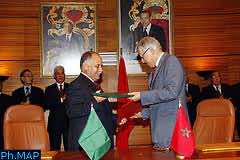 Morocco is allowing firms partly owned by Libyan authorities to conclude current transactions that would keep them in business – but without transferring dividends, selling their stakes or paying back debt.

in Libya and the implementation of U.N. resolutions, but has not diplomatically recognised the rebels.

The measures apply to “Moroccan firms whose capital is partially or totally owned by Libyan individuals or corporations,” it said.

“This decision was taken in order to allow these firms to conduct their business in good conditions and meet their commitments vis-à-vis foreign suppliers. It thus does not affect the spirit of the U.N. Security Council resolutions on freezing Libyan assets,” the regulator said.

The dirham is not fully convertible and authorities enforce draconian measures on its movement out of the country.

Other transactions, such as the transfer of dividends, proceeds from asset sales or the repayment of loans, “remain subject to the regulator’s approval”, it said.

A government source said: “being subject to the regulator’s approval means that it is banned”.

Libyan Arab Foreign Investment Co (Lafico), part of the state-owned Libyan Investment Authority (LIA), is among the key investors in Morocco. The majority of those investments consist of property and petroleum distribution outlets.

Tens of thousands of Moroccan expatriates are still in Libya and investment firms owned by the Libyan state are involved in joint-ventures that employ hundreds in Morocco.