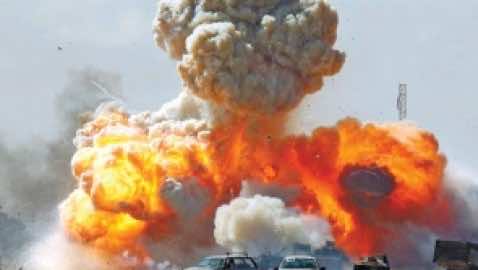 After months of bombing by the allied crusader forces, it is becoming increasingly apparent that Libya may have to be partitioned, as the West slowly loses momentum.

Like with Iraq and Afghanistan before it, it is obvious to any sane person with a modicum of common sense that such wars are not about protecting civilians, finding weapons of mass destruction, or removing brutal dictators coveted by the West for decades— rather it’s all about oil security.

As the crusader forces pummel Gaddafi’s obsolete hardware and ravage the country through indiscriminate bombing, resulting in hundreds of civilian causalities—one cannot ignore the fact that only a few months ago, Gaddafi and his family were portrayed by the West as reformed modernizers with a gleam of democratic credentials. In Britain, Gaddafi and his family mixed with the aristocracy and hobnobbed with the likes of Nat Rothschild, who,, through his friend Lord Mandelson, a confidant of ex-Prime Minister Tony Blair, helped engineer Libya’s rehabilitation in the so called comity of nations. As part of this assistance, Blair also exercised great freedom over the Libyan Investment Authority, which at the last count had $70 billion of plundered money belonging to the Libyan people. Yet none of these intertwined commercial interests between Britain and their agent Gaddafi prevented the former from turning against their surrogate for the last forty-one years.

Sensing the cataclysmic nature of protests across Libya, the UK was quick to abandon Gaddafi and expunge any vestiges of cooperation between the two countries. William Hague, the UK foreign secretary, scurried to announce Gaddafi‘s exit to Venezuela and that the UK was looking to a post-Gaddafi era. Nonetheless, the enigmatic Gaddafi, whom the British identified at Sandhurst and then nurtured and protected for four decades, dug in his heels and decided to fight his masters. Outraged by Gaddafi’s defiance, the British mobilized Western countries and the UN to use force to remove him from power—the unofficial goal of military intervention.

The story is reminiscent of the lives of several other brutal dictators that the colonial powers brought to power and armed to the teeth. They watched as their protégés oppressed the ummah, and when the time came, ditched them like disposal tissues. Saddam, Suharto, Musharraf, Mubarak, and Ben Ali are just some of the names that come to immediate recollection.

The West’s unrepentant treachery is not limited to their agents—it is far worse in both scope and magnitude when applied to the Muslim world. For the past eighty odd years, the West has ignored the plight of the Muslim masses, denied them the same values they espouse for their own citizens, and turned a blind eye to the tyranny of the Arab and Muslim rulers. The callousness of Western duplicity has reached new heights that humanity is not accustomed to. Where is the West’s moral compass and human rights standards when Israel slaughters Palestinians at will, Russia covers up the killing fields in Chechnya, India desecrates the daily lives of the Kashmiris, and China routinely carries out extra-judicial killings of Muslims in East Turkestan? The crimes of these states dwarf those committed by Gaddafi, but the West remains muzzled in its criticism. Then there is the bitter tyranny of the Saudi and Syrian regimes against their own people, the savagery of the Bahraini monarchy, and the cruelty of the Yemeni government. The West has hitherto chosen not take any punitive measures against these regimes and has played down military intervention. This selective application of western values has left an ineffaceable impression on the Muslim masses about the West’s true intentions.

Nevertheless, despite the West’s colonial suppression of Muslim masses and years of propping-up dictatorial regimes, a silver lining is fast emerging that makes uncomfortable reading for both the West and their agent despots. In a recent poll, the University of Maryland surveyed Muslims in Indonesia, Egypt, Pakistan, and Morocco, and found that 77% agree to unify all Islamic countries into a single Islamic state. The quest for the return of the Caliphate is no more a dream, but a reality that is shaping the contours of current thinking regarding alternative political systems for both Muslims and non-Muslims alike. In an IBD/TIPP poll, 61% of Americans believe that the establishment of the Caliphate is likely in the next 10 years.

The West through its own handiwork has already lost the Muslim masses, and now the inner power circles of other loyal agents to Western powers must be teetering on who to support. The choice is a simple one— the very same colonial powers that someday will intervene and hound them out of power or to support the ummah and re-establish the Caliphate that will make them heroes overnight . If I were a general, I know what I would be supporting.

The views expressed in this analysis are the author’s own and do not necessarily reflect the views of Morocco World News.