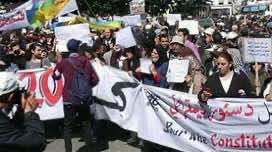 The making of the 2011 constitution in Morocco has renewed debates and theoretical curiosity about the trajectory of elite accords and their impact on pushing countries in transition beyond their intermediate phase of liberalization. Proponents of cooperative transitions shaped by soft-liners within regimes and assisted by political and civil society actors assert that democratic transitions based on compromise and a strategic necessity to reform have a better chance of success in managing uncertainty and securing a safe exit from authoritarian rule. Despite its elitist and undemocratic nature, the new Moroccan political pact is desirable as it constitutionalizes the principles of individual rights (freedom of expression, freedom of association, criminalization of torture and arbitrary detention) and citizen equality, and convincingly enhances legislative capacity and access to the policy realm. Transitional periods, argue its advocates, are naturally characterized by limited levels of democracy, but as civic consciousness rises and political competition becomes fully routinized, potent political parties and civil society actors are bound to emerge, strengthening in the process the institutions of government and driving levels of democracy up.

Skeptics of regime-led transitions, however, contend that the limited scope of political concessions embedded in pacts with the system does little to promote democratic practices, combat corruption and clientelism, or reinforce the rule of law. Indeed, it serves only to subvert the popular upsurge for political freedoms by demobilizing pro-democracy protesters while strictly controlling the extent to which political actors, interest groups, and civil society participate and influence public policy. In this perspective, the new Moroccan political contract, however liberal and progressive, provides mere liberalization that effectively perpetuates the structural constraints that hinder democratization. Whatever advancements are registered in the realm of participatory rights are counterbalanced by an institutional setting that consecrates a bipolar template of executive governance that favors the monarchy, and formalizes particularistic rules that guide and regulate behavior as well as expectations. This constitutional arrangement follows the predictable pattern of the past where unaccountable veto players (king and his royal cabinet) weaken elected institutions.

In the course of my recent field research trip to Morocco, I found both perspectives represented in intellectual, political and civil society circles as well as in my numerous interactions with ordinary Moroccans. But unlike the theoretical clarity of the transitologists and their doubters, opinions are guarded, nuanced, and at times contradictory. Most are hopeful that the road traversed henceforth would be smooth, leading to democratic deepening and the transformation in the composition of a complacent and corrupt political class. The alternative is a transition that progresses through protests and political violence. It is this latter scenario that frightens Moroccans even though many realize that without mobilization from below the current transition would probably proceed slowly and most likely fail to move beyond the limited political reforms that the regime and the opportunistic political class want.

For now, most Moroccans I spoke with emphasize the necessity of a peaceful transition that reforms rather than rebuilds the country’s political institutions. Despite the misgivings enunciated by many about the limited measures of democracy promotion in the new constitution, the majority wants—at least for now—an orderly transition. Several elements and events led to public endorsement of this approach, as evidenced by the overwhelming support for the referendum on constitutional reforms held on July 1st. Despite some regrettable irregularities, there is little doubt that the new constitution has the (qualified) support of the majority of Moroccans.

The first factor is the turbulent post-transitional period in Egypt and Tunisia as well as the protracted bloody revolts in Libya, Syria and Yemen. The initial excitement over the swift and historic overthrow of the Tunisian and Egyptian dictators has quickly been dampened by the subsequent political turmoil, rising acrimonious intra-elite infighting, and dangerous social tensions griping both countries. These turbulent transitions, in addition to the turmoil in other frozen conflicts, are cited by many of my interviewees as cautionary tales of the dangers of transitions by revolution. The breakdown phase of authoritarian structures in rapid transitions is naturally characterized by uncertainty and friction, as well as risks of violence and “authoritarian reversion”. Transitions born out of a violent struggle, as currently occurring in Libya and Syria, also run the risk of producing institutions and set of rules that reflect the brutality from which they spring up. These rocky models of political change have provided several Moroccans with case studies of how not to make a democratic transition. If, however, the revolutions (especially those of neighboring Tunisia and Egypt) succeed in creating efficient democratic forms of government and the Moroccan transition stalls, then the struggle for democratization in the Kingdom might start to take different forms.

A second factor that boosted support for a gradual transition towards democracy is the proliferation of volatile strikes, protests, occupation of public places,andblocking of railway lines. The exponential growth of roadside carts in the last few months has become almost unbearable. No longer harassed by the police, street vendors have ventured into “the busiest spots”, occupying whole neighborhoods of streets and severally disrupting traffic and affecting struggling small businesses. The sprouting of illegally constructed structures in several cities, which threaten to reverse the government’s gains of the last few years in eradicating this phenomenon, is also cited by many of my interviewees as examples of growing lawlessness in the kingdom. The horrendous terrorist attack in Marrakech on April 28 further heightened anxiety that social contestation and political agitation could end up benefiting violent salafi movements. This tense environment has clearly contributed to the “yes” vote for the constitution. Most Moroccans desperately want change, but insist on a peaceful transition that averts taking the country down the road of destabilizing protests that meet with violent state repression. Such cycles of demonstrations and repression might eventually be the only means to advance the democratic process forward.

Street pressure and workers mobilization can have a positive effect on the democratizing process in as long as they become tools to force the regime to fulfill its promises of reform and become more responsive to peoples’ needs. Several of my interlocutors, especially those in the opposition, stressed the absolute necessity for continuing pressure from below to guard against the old practices of authoritarian governance. The problem, however, is that so far each protesting group or individual seems to have its own narrow interests rather than the greater interests of the country. Complicating matters for democracy promoters is that the February 20th movement has not managed to convince the majority of Moroccans of its democratic bona fides. These doubts about the movement have served as another enhancing factor for the support of the current transition.

In my conversations with activists in the February 20th movement, one could not help but notice that the movement lacks focus and singularity. Its members still pain to articulate a workable vision for substantive political change and shake off accusations that the movement is dominated by the banned but tolerated Adl wa Ehsane, and to a much lesser extent by radical leftist forces. My interviewees conceded that the movement needs to refocus its strategy and slogans. Continuing to protest against a constitution endorsed by the majority of the electorate and to shout provocative slogans (No to a ruler who steals public money) is a losing strategy that only exacerbates tensions with the regime. As one a member of the February 20th movement told me, there is a growing realization, even within revolutionary forces, that adopting more aggressive protest strategies while waiting for the monarchy to falter or social protests to evolve into a revolution, would not advance the group’s proclaimed goals of fighting corruption and promoting democratic practices.

The next few months are crucial in the trajectory of political reforms, and the February 20th movement can play a critical role in driving change. New election laws are in the process of being drafted and they must provide for a democratic electoral process, free from the current flagrant malapportionment and gerrymandering of electoral boundaries. Only free and fair elections, Saadeddine Othmani, of the moderate Islamist party of Justice and Development, told me, can produce the new political elite the country so badly needs. It is these elites that would be tasked with drafting the many “organic laws” that the new constitution stipulates.

The Moroccan experiment has the theoretical potential to demonstrate the interplay between popular upsurge and regime-instigated democratization. Scholars of Morocco have been arguing for a decade now that democracy cannot take root in Morocco without pressure from below. That paradigm shift was and still is critical towards the Kingdom’s evolutionary movement towards consecration of the separation of powers, judicial independence and protection of civil liberties.