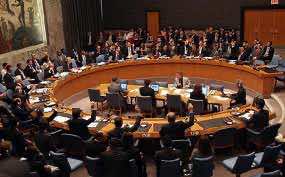 The Security Council today condemned the widespread violation of human rights in Syria and the use of force against civilians by the country’s security forces, calling for an end to the violence and urging all sides to act with restraint and refrain from reprisals, including attacks against State institutions.

The Council voiced its profound regret at the deaths of hundreds of the people during mass protests in Syria and urged the authorities in Damascus to fully respect human rights and comply with their obligations under international law.

“Those responsible for the violence should be held accountable,” the Council said in a presidential statement read by Ambassador Hardeep Singh Puri of India, which holds the Council’s rotating presidency this month.

Syria has been rocked by deadly civil unrest since mid-March, driven by calls for greater civil liberties. The strife followed similar protests across North Africa and the Middle East that toppled entrenched regimes in Tunisia and Egypt, led to conflict in Libya and caused unrest in Bahrain and Yemen.

The Council took note of Syria’s stated commitment to the implementation of reforms, but expressed regret over the lack of progress, calling on the Government to carry out the promised political changes.

The 15-member United Nations body also reaffirmed its strong commitment to the sovereignty, independence, and territorial integrity of Syria.

It stressed that “the only solution to the current crisis in Syria is through an inclusive and Syrian-led political process, with the aim of effectively addressing the legitimate aspirations of and concerns of the population which will allow the full exercise of fundamental freedoms for its entire population, including that of expression and peaceful assembly.”

The Council called upon the Syrian authorities to respond to the humanitarian needs of people in areas affected by the unrest by ceasing the use of force to allow quick and unhindered access by relief workers.

The Syrian authorities should also cooperate fully with the Office of the UN High Commissioner for Human Rights (OHCHR), the Council added. It requested the Secretary-General Ban Ki-moon to update it on the situation in Syrian within seven days.

Lebanon, one of the Council’s non-permanent members, dissociated itself from the presidential statement, but did not seek to block its adoption.

Mr. Ban welcomed the Council’s statement, saying it sent a “clear message from the international community” to the Syrian authorities to stop their “brutally shocking” actions. He once again urged Syrian President Bashar al-Assad to cease all acts of violence, stating that the aspirations of the citizens of the country must be addressed.

“All killings should be investigated fully, independently and transparently,” Mr. Ban told reporters after the Council delivered its statement.

“Those responsible should be held to account. The legitimate aspirations of the Syrian people must be addressed through an inclusive Syrian-led political process that guarantees fundamental freedoms and rights for all,” he added.

Responding to a question on how he would gather the information required to update the Security Council, Mr. Ban said he would mobilize all UN agencies and cooperate with non-governmental organizations (NGOs) and other groups. “I will spare no efforts in this regard,” he said.

The Secretary-General stressed that his assessment will “unbiased, impartial and true to the facts.”

He also emphasized that the Syrian authorities must allow humanitarian assessment teams and the UN Human Rights Council-mandated fact-finding mission into the country.