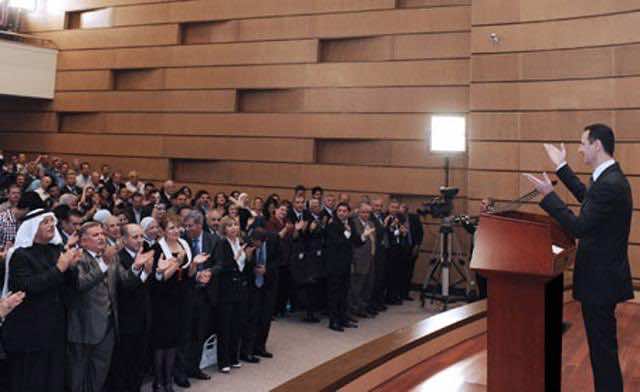 The decree allows political parties to be established and to function alongside the Baath party, in power since 1963 with the constitutional status of “the leader of state and society.”

At the time, SANA reported the draft legislation was “aimed at enriching political life, creating a new dynamic and allowing for a change in political power.”

“The bill stipulates the essential objectives and principles governing the activities of parties, conditions for their establishment … and rules relating to their financing, their rights and their obligations,” SANA said.

It prohibits parties founded on the basis “of religion, tribal affiliation, regional interests; professional organizations as well as parties which discriminate on the basis of race, sex or color,” the report said.

Political pluralism has been at the forefront of demands by pro-reform dissidents who since March 15 have been taking to the streets across Syria almost daily to call for greater freedoms.

The decree came a day after regime loyalists meeting in Damascus urged President Assad to undertake political reforms and speak to demonstrators staging a revolt against their government.

An Associated Press reporter at Sunday’s meeting at a hotel in the capital said the gathering was government-sanctioned. But jittery staff cut the power in the meeting, trying to make the dozens of attendees leave quickly.

Opposition activists say it’s too late for any efforts to bridge the gap between the regime and the protesters.
The decree came hours after the UN Security Council stepped up pressure on Syria’s rulers by condemning the bloody crackdown and saying those responsible should be held accountable.

The council was unable to agree on a resolution, but settled on a less-binding statement condemning “the widespread violations of human rights and the use of force against civilians by the Syrian authorities.”

“Those responsible for the violence should be held accountable,” it said, in its first pronouncement on the Syrian crisis since the protests began.

The UN statement came as tens of thousands of Syrian protesters again took to the streets on Wednesday, despite a tank assault on the flashpoint protest city of Hama.

Pro-democracy protesters have vowed to protest every night of Ramadan following evening prayers despite the assault on Hama and the killing of some 120 people across the country on the eve of the Muslim holy month.