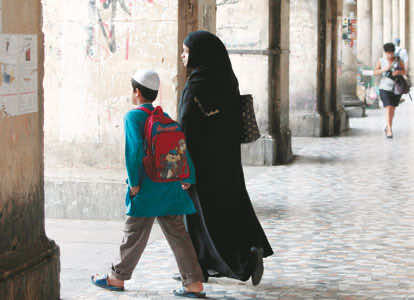 Rome–An Italian parliamentary commission has approved a draft law banning women from wearing veils that cover their faces in public.

The draft passed by the constitutional affairs commission on Tuesday would prohibit women from wearing a burqa, niqab (a cloth which covers the face) or any other garb that covers the face in such circumstances. It would expand a decades-old law that for security reasons prohibits people from wearing face-covering items such as masks in public places.

Women who violate the ban would face fines of 100 to 300 euros, while third parties who force women to cover their faces in public would be fined 30.000 euros and face up to 12 months in jail. Italy, an overwhelmingly Catholic country with a small Muslim minority, is the latest European country to act against the burqa. France and Belgium have banned the wearing of burqa-style Islamic dress in public, as has a city in Spain. The Belgium law cited security concerns.

The Italian law was sponsored by Souad Sbai, a Moroccan-born member of Premier Silvio Berlusconi’s conservative Freedom People party, who said she wanted to help Islamic women better integrate into Italian society. “Five years ago, no one wore the burqa (in Italy). Today, there is always more. We have to help women get out of this segregation … to get out of this submission,” Sbai said in a telephone interview. “I want to speak for those who don’t have a voice, who don’t have the strength to yell and say, ‘I am not doing well.’” According to some estimates, 3,000 women in Italy cover their faces with veils, she said, adding that many of them are forced to do so.

However, the spokesman of an Islamic group said banning the Islamic veil “is unjust and touches individual liberty.” “This topic continues to be a sort of criminalization and media dramatization. In Italy, there aren’t even 100 women who wear the niqab, and not even one who wears the burqa,” The preliminary approval was welcomed by lawmaker Barbara Saltamartini, vice president of the Freedom People party caucus in the lower house. “Final approval will put an end to the suffering of many women who are often forced to wear the burqa or niqab, which annihilates their dignity and gets in the way of integration,” Saltamartini said in a statement.