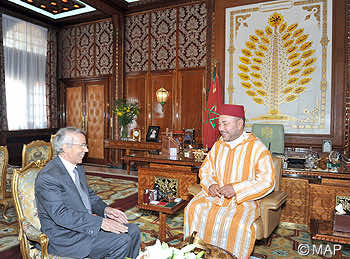 Rabat – HM King Mohammed VI received, on Wednesday at the royal palace in Rabat, Abdeltif Menouni, whom the Sovereign appointed Advisor to His Majesty.

Professor Menouni is known for his scientific expertise and extensive experience in terms of drafting laws, an experience he has shown throughout his career as a university professor which qualified him to chair the Advisory Committee for the Revision of the Constitution, said a statement of the Royal Cabinet.

In carrying out his mission at the head of the commission, Professor Menouni demonstrated a strong sense of dialogue and communication as well as laudable qualities, in addition to his thorough knowledge of political and social fields in Morocco, the statement added.

Menouni will take office from the end of September.