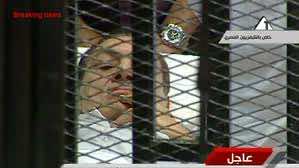 Ousted former President of Egypt Hosni Mubarak made his first public appearance since 11 February in a court cage on Wednesday morning, as a defendant on charges of corruption and killing protesters during the uprising in January 2011.

One of the most important demands of the Egyptian revolution is a fair trial of the former president and all his regime figures for all his alleged crimes.

Mubarak’s sons, Gamal and Alaa, showed up in court after they were transferred from the Tora prison, where they have been held since mid-April 2011.

Former Interior Minister Habib al-Adly, who is being tried with the former president, showed up as well – in a blue convict’s jumpsuit – alongside his six aides, who also face charges.

Mubarak is accused of conspiring with former interior minister Habib El-Adly to intentionally killing thousands of peaceful protestors during the 25 January uprising in several Egyptian governorates.

“The intention to kill a number of protesters is there. Those protesters took part in a peaceful uprising in different governorates against the declining social, political, economic and security conditions. They demanded reforms, on top of which is to put an end to Mubarak’s rule and that of his regime”, the prosecutor said.

The prosecutor also charged Mubarak with profiteering by acquiring for himself and his sons five villas worth nearly LE40 million through formal sales contracts provided by Hussein Salem, who in return acquired 2 million square meters of land in the South Sinai resort town of Sharm el-Sheikh.

Gamal and Alaa face corruption charges but are not accused of conspiring to kill protesters. Mubarak’s case was postponed until 15 August.

Judge Ahmed Refaat, head of the Cairo Criminal Court, issued an order that Mubarak will be confined at the Egyptian army’s International Medical Center which is located on the Cairo-Ismailiya road East of Cairo, and allowed the former president to receive all necessary medical care there.