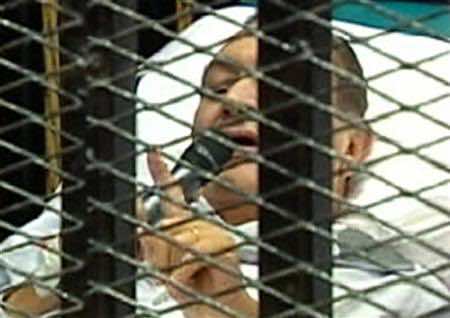 Many Egyptians struggled with torn emotions on Thursday as they reviewed images splashed over newspapers and repeated on television of their octogenarian former president, a day after he went on trial following 30 years at the helm.

“Mubarak in the cage … Now the revolution has succeeded,” Al-Akhbar blared in a banner headline over a picture of Hosni Mubarak lying on a hospital trolley behind a cage in court.

“Mubarak and his regime present in the grip of justice,” wrote the Al-Ahram, another state newspaper that would once have praised Mubarak’s every move.

A few Egyptians revelled in the scene and said his appearance in bed was an act to draw sympathy. Others said this was no way to treat an old man. However, many of those asked for their views showed sympathy but said justice must be done.

“I felt sorry for him but still that doesn’t mean he should be spared from being held accountable for all what he did,” said Michael Atef, 27-year-old accountant. “This trial is a must.”

Those in the court gasped when they saw Mubarak, 83, a former air force commander, wheeled into the cage where defendants in criminal cases are customarily held.

The last time he spoke in the Police Academy on the outskirts of Cairo where the court was set up was when he was still in charge, praising the role of the police force. That was on January 23. Two days later protests erupted against his rule.

In the days that followed, police used live ammunition, rubber bullets and teargas to try to quell the protests. About 850 people were killed in the 18-day uprising. Mubarak is now charged with their deaths and could face the death penalty.

His only words on Wednesday from his bed were “Sir, I am present. I entirely deny all those accusations.”

For some, even the sight of their weakened president did not dent their anger.

“I would rather have mercy for a dog or cat than this man. This whole scene of him on a stretcher is an act. He could have sat down and talked. This is just to try to gain the nation’s sympathy,” said Somaya Sa’ad, 63, retired.

“He has caused so much oppression to this country for the past 30 years, let’s not forget that.”

For others images of him lying on a bed, occasionally lifting his head to watch proceedings was too much humiliation for a man who led Egypt’s air force against Israel in the 1973 war and steadied the nation after his predecessor Anwar Sadat was assassinated in 1981.

“I had tears in my eyes watching him lie helplessly like that. We shouldn’t forget the good qualities he had when he was president,” said Badr el-Din Gabr, 56, who works in advertising.

“He shouldn’t have been put in the dock with the whole world watching him. This is an insult to Mubarak and an insult to Egyptians.”

The trial, televised around the world, transfixed Egyptians and other Arabs, most of whom have spent their lives under authoritarian systems shaken by this year’s “Arab Spring”.

But most Egyptians said that, however pitiful they found the scene, justice must be done to fulfill the goals of an uprising that ejected him from power on February 11.

They blamed Mubarak for deeply dividing the nation between rich and poor and a powerful elite versus a powerless majority.

“It’s human to err and as humans, we should be merciful over such a scene … I wouldn’t even wish it for my worst enemy. But there is a difference between my heart sympathising and my belief that justice and accountability must be served,” said Amal Abdel Haleem, a 40-year-old housewife.

Where many Egyptians could unite was in anger at his sons, Alaa, who had business interests, and Gamal, a banker-turned-politician who was once seen as being groomed for office. Many felt they used their father to amass wealth and influence.

“I do not sympathise with his sons. They both knew what they have brought upon their father, caring for their interests on his account by making him rule at an old age so they can benefit,” Wael Badr, 40-year-old lawyer, said.