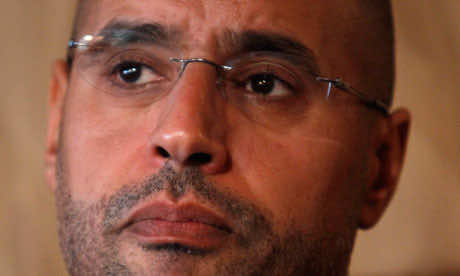 The one-time alternative face of Colonel Gaddafi’s regime, his son, Saif al-Islam, has declared allegiance to Islamists whom he had previously branded as lead-conspirators in the five-month rebellion that has crippled Libya. The move is a departure from five months of rhetoric by Gaddafi junior and his father, both of whom had repeatedly cast the five-month uprising as a putsch by Islamists with a jihad agenda.

Now, Saif Gaddafi has suggested he is prepared to help Islamic groups oust any secular movements in Libya and even suggested Libya could emerge from civil war as an Islamic state.

“You want us to make a compromise. OK,” he said in an interview with the New York Times. “You want us to share the pot. OK, but with who? The Islamists are the real force on the ground.”

Gaddafi, who has only twice agreed to be interviewed since the rebel uprising in Libya in February, had transformed his appearance. He wore a beard which was characteristic of the fundamentalist salafist, or wahabi interpretation of Islam during the interview, and reportedly carried Islamic prayer beads.

Before the uprising he was often seen in the elite clubs and hotels of Europe, where he had cultivated a reputation as a cultivated, western-orientated heir apparent to the four decades of often oppressive rule of his father.

Now, according to the man he described as the “spiritual leader” of the Islamists in eastern Libya, “secular people … have no place here in Libya”. Citing an Islamist figure, Ali Sallabi, Gaddafi said: “These are our common enemies, those nice people with jackets and ties, flying in on private jets from Paris and London.”

The apparent about-turn could be an attempt to play to common concerns among Arab states that fundamental Islamists may use the vacuum created by the fall of decades-old dictatorships to push for the introduction of Islamic law and societies that disavow any notion of plural democracies.

The Muslim Brotherhood movements in Egypt and Jordan both espouse a literal interpretation of Qur’anic teachings and were perceived as subversive threats in Hosni Mubarak’s Egypt and also in Syria, where the troubled regime of Bashar al-Assad is attempting to portray the uprising there as an Islamic conspiracy supported by the US and Israel.

North Africa has been a front for several Islamic insurrections in recent years and Libya’s rebellion does have a strong Islamist element, which has formed an alliance with more liberal members of the Benghazi establishment, as well as elements of Colonel Gaddafi’s army which defected in large numbers in February.

The secular side of the rebels has so far been satisfied that the Islamists share a common goal of ousting Colonel Gaddafi and would not stand in the way of plans to democratise Libya if the regime falls. But in Tripoli regime propaganda has cast the country’s Islamists as al-Qaida operatives. Posters in Green Square, which remains a government stronghold, show bearded men whom they brand as al-Qaida fighters in cahoots with the US.

Gaddafi said: “We don’t trust them [Islamists]. But we have to deal with them.”

In Misrata many said Saif-Al-Islam’s comments were an admission that Tripoli supports terrorism. “We have said it before, we say it to the whole world, Gaddafi is behind every terrorist group,” said Khalid Alwafi, a criminal lawyer and war crimes investigator. “Now he has admitted it himself, through his son.”

Other rebels say they are incredulous, pointing out that for months the Gaddafi regime has publicly blamed the rebellion on al-Qaida and Islamic fundamentalists, but now appears to have reversed course by embracing them.