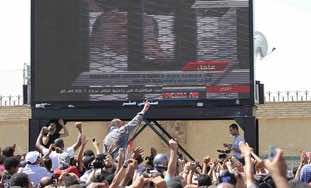 The dramatic images of ailing Hosni Mubarak in the defendants’ cage has captivated the Arab world, where the murder trial of Egypt’s former president has been hailed as a lesson for those clinging to power.

Footage of the ailing 83-year-old, lying on a hospital bed behind the wire mesh of the cage on Thursday, was broadcast across the Arab world, consuming a region where the mainly autocratic rulers are rarely held to account.

From Morocco to Jordan, Arabs were fixed to their television screens or following the live updates of the trial on Facebook and Twitter, dumbfounded.

“This day has transformed into what feels like a dream because no one imagined that an autocrat would sit behind bars answering the judge’s questions and listening to a long list of charges,” said Palestinian newspaper Al-Quds in an editorial.

“Each and every Arab hopes that this historic case will be a lesson for all those clinging to their chairs to listen to the demands of peoples who ask for freedom, democracy and social justice,” it said.

Mubarak is the first regional leader to face his people in court since the start of the regional uprisings known as the Arab Spring, which prompted a deadly crackdown in some countries like Syria and even sparked war in Libya.

In Damascus, the state-owned press avoided commenting on the trial, except for Al-Baath, the ruling party’s mouthpiece, which only made brief mention of the fact that the hearing was adjourned until August 15.

Former Tunisian president Zine El-Abidine Ben Ali, who was chased out of power on January 14 by a popular uprising, is currently on trial in absentia, after having fled to Saudi Arabia.

Former Iraqi president Saddam Hussein was put on trial after the US-led invasion of Iraq.

“We will probably not witness a (Ben Ali trial) and Tunisia still hasn’t suspended relations with Saudi Arabia,” said Tunisian activist Amira Yahyaoui in a tweet.

There was no official reaction from Riyadh, once close to Mubarak and suspected of pressuring the current Egyptian leadership to avoid putting the former president on trial.

But the Saudi press, which usually reflects the kingdom’s official stance, welcomed the “civilized” proceedings.

Under the headline “The rule of the judiciary”, daily Al-Jazira wrote that “there are no exceptions” to justice.

“Illness does not prevent the defendant from being held accountable for his mistakes, neither does his long national work and public service,” the paper said.

Al-Riyadh daily described the trial as “a civilized trial in which conditions were met by both prosecution and defense, in addition to the presence of witnesses,” hailing Egypt’s judiciary as “independent and impartial.”

“The historic trial of Mubarak is great proof that the people of Egypt have defeated dictatorship,” wrote Taher Adwan, in the independent Jordanian daily Al-Arab Al-Yawm.

In Morocco, the press described the trial as a triumph.

“This trial is a victory for the will of the people in the region who want democratization,” said Moroccan daily Al-Tajdid.

But some commentators were more tempered in their enthusiasm.

“It’s very nice that the people were able to remove and prosecute a whole regime, but it should be done without vengeful feelings that will cause future grudges,” wrote Hafez al-Barghuti in the Palestinian Al-Hayat Al-Jadida.