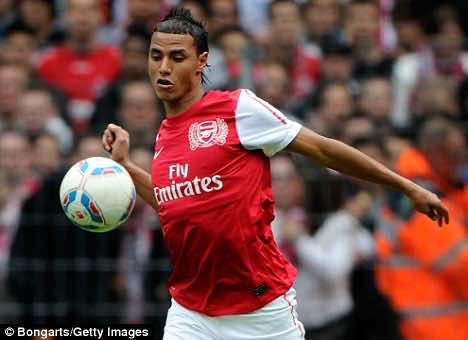 Marouane Chamakh has ruled out a move to Roma, insisting he determined to prove himself at Arsenal this season.

Gunners boss Arsene Wenger signed the Morocco international on a free transfer from Bordeaux last summer and enjoyed a promising start at the Emirates, scoring 11 goals before Christmas.

But the striker struggled to win a first-team place after the New Year and the Serie A side are keen to rescue him as a ready-made replacement for Mirko Vucinic, following his departure to Juventus.

Chamakh, however, is keen to start afresh this season and show he can be a success in England.

‘I want to make my name in the Premier League,’ he told Sky Sports.

‘I started well last season and lost my way. However, I want to make a name for myself here.

‘I’ve heard a lot of rumors about me leaving the Gunners, but I have a contract here.

‘I want to honor it and make myself No 1 in my position. I am looking forward to that.’