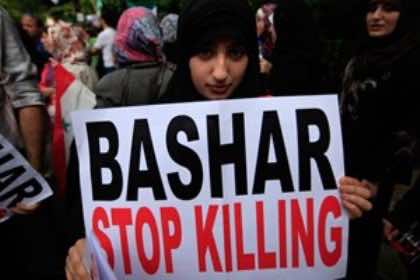 As the crackdown by the Syrian Government against its own people continues unabated, a group of United Nations human rights experts today renewed their call for an immediate end to the violence used by the authorities against ongoing protests.

“The Government of Syria cannot be allowed to violate with impunity its obligation to uphold international law nor attack the very citizens it has sworn to protect without consequences,” the experts stressed in a news release.

“We unequivocally call on the Government of Syria to immediately cease the violent crackdown, stop the killings and pursue dialogue through peaceful processes,” they added.

The call by the experts, who all report in an independent and unpaid capacity to the UN Human Rights Council in Geneva, comes two days after the Security Council condemned the widespread violation of human rights in Syria and the use of force against civilians by the security forces.

The country has been rocked by deadly civil unrest since mid-March, with the Government cracking down on protesters demanding greater civil liberties. Similar protests have erupted across North Africa and the Middle East since the start of this year, having already toppled regimes in Tunisia and Egypt, and leading to ongoing conflict in Libya.

Media reports say that Syrian security forces opened fire today on protesters who poured into the streets by the tens of thousands as the regime continued its assault on the besieged city of Hama, where around 100 people are reported to have been killed in recent days.

The experts said they continued to receive reports of the systematic use of excessive force resulting in killings and injuries; allegations of torture, enforced disappearances, arbitrary arrests and detention of protestors; targeting of human rights defenders; and unjustified limitations on freedoms of peaceful assembly and expression.

“It is of utmost importance that the Government finally addresses the legitimate concerns of peaceful protestors, instead of silencing their voices with brute force,” said Mr. Kiai.

The UN Special Rapporteur on extrajudicial, summary or arbitrary executions, Christof Heyns, added that the indiscriminate use of heavy artillery against demonstrators cannot be justified.

“No State is allowed to use its military force against an unarmed civilian population regardless of the situation prevailing on the ground,” he stated. “The killings that result are clearly arbitrary executions and punishable under international law.”