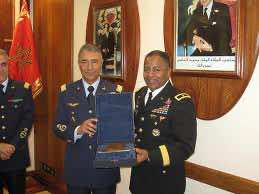 Speaking at a press briefing on occasion of the delivery to the Royal Air Forces of a first batch of F-16 fighting jets, the US General highlighted the close and longstanding relations between the US Army and the Royal Armed Forces.

She described the purchase of F-16 fighting falcons by Morocco as a watershed event in the Moroccan-American relations, adding that the acquirement of these aircrafts by Morocco is a step forward towards a further development of Morocco’s air force.

General Woodward praised the Moroccan pilots and hailed the Royal Armed Forces as a strategic partner at the international level.

Morocco is a regional leader, she stressed, noting that the leading role of the Royal Armed Forces in the region is also manifested in the participation in multiple humanitarian missions to bring assistance to African populations.

Speaking on the same occasion, US Ambassador to Rabat Samuel Kaplan said that the purchase of F-16 aircrafts by Morocco evidences the strong and longstanding friendship between the USA and Morocco.