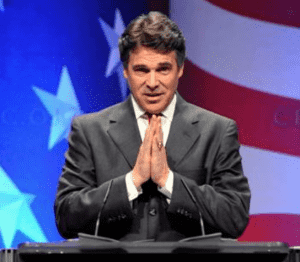 This weekend, Gov. Rick Perry will host a mass Christian prayer rally in his home state of Texas. The principal sponsor of the rally, the American Family Association, has a truly vile record on immigration issues. The Association’s principal spokesperson on policy issues, Bryan Fischer, says that Muslims should be barred from becoming naturalized citizens because, he says, Islam requires Muslims to kill Christian Americans.

Fischer has hosted a number of Republican presidential hopefuls, including Mike Huckabee and Tim Pawlenty, on his powerful “policy” radio broadcast that is heard nationally. His tarring of all Muslims as destructive of America has not dissuaded Perry and others from seeking Fischer’s favor. For instance, this rant by Fischer was deemed beyond the pale by Republican leaders:

We allow unrestricted Muslim immigration into the United States. We are welcoming to our shores, welcoming to our borders, men who are determined to destroy us. They’ve said it themselves, it’s in their own writings, it’s in their own words; they’re out to eliminate and destroy western civilization. It’s just absolute folly to invite that kind of toxic cancer into our culture, but that’s what we’re doing every single day.

Fischer has said that Muslim immigrants are not protected by the First Amendment. Fisher says there should be  “no more mosques, period” because “each Islamic mosque is dedicated to the overthrow of the American government.”

Fischer says that Muslim’s should be ineligible to enter the U.S. and that those who are already here should be deported:

[T]he most compassionate thing we can do for Americans is to bring a halt to the immigration of Muslims into the U.S. This will protect our national security and preserve our national identity, culture, ideals and values. Muslims, by custom and religion, are simply unwilling to integrate into cultures with Western values and it is folly to pretend otherwise. In fact, they remain dedicated to subjecting all of America to sharia law and are working ceaselessly until that day of Islamic imposition comes.

The most compassionate thing we can do for Muslims who have already immigrated here is to help repatriate them back to Muslim countries, where they can live in a culture which shares their values, a place where they can once again be at home, surrounded by people who cherish their deeply held ideals. Why force them to chafe against the freedom, liberty and civil rights we cherish in the West?

In other words, simple Judeo-Christian compassion dictates a restriction and repatriation policy with regard to Muslim immigration into the U.S.

Fischer was a harsh critic of evangelicals who endorsed immigration reform as a way of showing compassion to the undocumented. Last year he wrote this in The Hill:

But upholding the law is not mistreatment. We do no wrong to the shoplifter by holding him accountable for his behavior. In fact, enforcing the law is the way government shows compassion for victims of crime. Compassion is misdirected if it is targeted toward lawbreakers rather than victims.

Where is the compassion for the residents of Arizona who are forced to cope with drug smuggling, drug-related violence, human trafficking, home invasions, kidnappings and $2.7 billion in annual costs imposed on them by illegals for education, welfare, law enforcement and healthcare?

There’s no way around the fact that my evangelical friends want to reward aliens who break the law.

We should instead deal with the 12 to 20 million illegals currently in the country through attrition, by making access to any taxpayer-funded resource — whether education, welfare or healthcare — contingent upon proof of legal residency.

Once illegals realize they will be sent home the moment they come to the attention of any government agency or any branch of law enforcement, they will immediately stop being a drain on taxpayer resources and will be the most law-abiding residents we have.

Rigorous use of the E-Verify system will dry up the job market for illegals, once again creating incentives for them to self-deport.

Enforcing our immigration policy need not break up families. The president sent spouses and children along when he deported the Russian spies, and we can do the same with every illegal alien. We do not want to separate husbands from wives, or children from parents, so our policy should be to repatriate entire families together to preserve family integrity.

If a member of a family has the legal right to remain in the U.S., he of course should be allowed to exercise that right. But then the family itself would be responsible for dissolving the family unit, not the United States.

This post was first Published on NYS Immigrant Action Fund