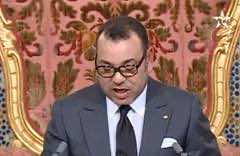 Secretary of State Hillary Clinton and Members of Congress voiced congratulations and strong support for Morocco’s new Constitution, which strengthens and advances the country’s commitment to human rights, freedom and equality, participatory democracy and governance.

In her congratulatory message marking Morocco’s July 30th National Day, Secretary Clinton expressed the United States’ support “during this time of profound change in the Middle East and North Africa” for Morocco’s “efforts to strengthen the rule of law, human rights and good governance.” She called Morocco’s peaceful July 1 referendum approving its new Constitution “an important step toward democratic reform” and said “Morocco is a longstanding friend, partner, and ally of the United States.”

A letter from Congress to His Majesty King Mohammed VI this week called Morocco’s vote for Constitutional reforms an “important milestone” and applauded “the new liberties brought forth by the new National Council of Human Rights (CNDH) which include gender equality, the rights of children and young people, the rights of vulnerable groups, and the oversight and coordination of a national plan to promote human rights.” The letter — signed by Reps. Steve Cohen (D-TN), Mario Diaz-Balart (R-FL), Gary Ackerman (D-NY), Michael Grimm (R-NY), Sheila Jackson Lee (D-TX), Billy Long (R-MO), James Moran (D-VA), Christopher Murphy (D-CT), Charles Rangel (D-NY), Dennis Ross (R-FL), Loretta Sanchez (D-CA), and Heath Shuler (D-NC), — said the July 1 referendum was “a more democratic and humanitarian way to serve the citizens” of Morocco, and “a considerable step toward meeting the political desires and social freedoms of your citizens.”

In her July 29th Congressional Record remarks, Rep. Jackson Lee noted that Morocco has remained peaceful in the Arab Spring turmoil and urged continued U.S. support for a strong ally as it continues on the reform path. “Today,” she said, “with chaos and conflict spreading in North Africa and the Middle East, it is important that the United States recognize and encourage those countries that share our democratic values and support reforms so badly needed in the region. There is no better friend and ally for America in North Africa than the Kingdom of Morocco.” Jackson Lee said Morocco should be applauded for “its continuing reform process and desire to improve the lives of all Moroccans, including the Western Sahara.”