Morocco World News
Home Sports Football is not the only religion 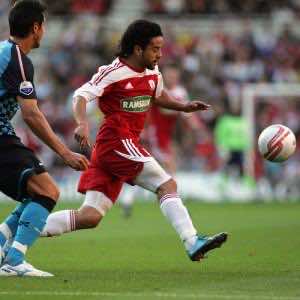 The new Championship season begins this weekend, but for one player, there are more important matters to deal with. Chief Sports Writer Scott Wilson talks to Middlesbrough midfielder Merouane Zemmama about faith and football, and the challenge of combining the two

THIS morning, Merouane Zemmama rose from his bed at 3am. He went downstairs with his family, ate a healthy breakfast of cereal, breads and dried fruit, and returned upstairs for further sleep. He rose again at around 9am, but went fed and unwatered. He will not eat or drink again until 9pm this evening.

One of the few devout Muslims playing in the English game, Zemmama is trying to combine the demands of his profession with the tenets of his faith during the Holy Islamic month of Ramadan. It is not an easy task.

Ramadan demands that all Muslims fast during daylight hours, so while the rest of the Middlesbrough squad stick to the nutrition and hydration guidelines laid down by the club’s dieticians, Zemmama is living his life according to a different set of instructions. As a result, his participation in today’s Championship opener against Portsmouth is in doubt.

“Ramadan started on Monday and that creates a few difficulties in terms of training and playing in the matches,” said Zemmama, who was born in Sale, Morocco, and did not leave his homeland until 2006.

“On the day of a home game, I am not allowed to eat or drink during daylight hours so that makes it extremely difficult for me to give my best. I have spoken with the manager about the situation and he understands where I am coming from very well.

“For away games, there is no problem. When we travel for over 85km as part of our job, we are allowed to eat and drink. If any Muslim travels more than 85km as part of their daily work, they have permission to eat. That is not just footballers, that is anyone involved in a trade.

From a western perspective, it is hard to comprehend the devotion and belief that must be necessary to adhere to such strict religious guidelines, particularly when they impinge so dramatically on your ability to do your job.

To Zemmama, however, the thought of watering them down does not even enter his mind. There is no element of choice in the instructions of the Islamic faith, they are simply something you do.

“I understand why some people will see this as strange,” he said. “But for me it is not something I can question or think about. This is who I am and what I do, it is as simple as that. Just like other people breathe without thinking, so it is the same with a Muslim and the demands of Ramadan.

“It is not something you can pick and choose, it is bigger and more important than that. It is also something I have been doing all my life, so I am used to it. I do not feel as though it is an intrusion into the rest of my affairs.”

Zemmama is not the only Muslim to have played in England, indeed he is not even the only Moroccan, with Mustapha Hadji, Youssef Safri and Youssef Chippo all having represented Coventry City.

Nevertheless, it remains rare for north Africans to ply their trade in Britain, with most preferring to move to France, which boasts stronger colonial ties to the region.

Since signing Zemmama in January, Middlesbrough have had to make minor tweaks to their facilities and routine to accommodate the 27-year-old’s beliefs.

Zemmama must pray five times a day, and Boro have set up a special prayer room at their Rockliffe Park base. They have helped introduce their player to the Islamic communities of Darlington and Middlesbrough, and Zemmama is now a regular visitor to Darlington’s Jamia Mosque.

And on a matchday, whether at home or away, they allow him to slip away from the pre-match preparations to pray.

“I pray here at the training ground whenever I am in for training,” he said.

“I also pray before every game. Each prayer takes five or ten minutes, and the club have been very good about making sure I have the facilities and the time that I need.

“I’ve also been to mosques in Darlington and Middlesbrough to pray, and everyone has been very welcoming. I have been made to feel very welcome wherever I have gone, whether it has been to Islamic areas or other parts of the towns and cities.

“I feel as if the UK is somewhere that is very welcoming and tolerant of other religions.”

Zemmama, a bright, articulate and bubbly character, has also been embraced by the rest of the Middlesbrough dressing room, who respect his beliefs but appreciate his willingness to integrate wherever possible.

As a staunch teetotaller with a young child, the midfielder could have been forgiven for excusing himself from May’s end-of-season players’ night out. The fact that he didn’t went down extremely well.

The fact that he can play obviously helps as well, and after a summer that has seen the departure of a string of established attacking players such as Julio Arca, Leroy Lita and Kris Boyd, Zemmama’s deft footwork and dribbling ability make him a key member of the squad.

He can play on the left or right-hand side, or behind a lone striker, and while his involvement in the second half of last season was largely restricted to a string of cameo appearances from the bench, his role in the current campaign will be much more integral.

Because of his diminutive stature and ease in possession, the comparisons with Juninho are inevitable. But can such a player survive amid the blood and thunder of the Championship?

“People told me to expect a lot of hard tackles in the Championship,” said Zemmama. “But I don’t really think it is much different to what I was used to in Scotland. I think they are two similar leagues.

“I had had three months to see what the Championship is like and I am confident there will be no problems this year. I spent four-and-a-half years in Scotland and I am sure I will be fine.”

Will Middlesbrough be equally successful? Despite the traumas of the summer, Zemmama does not see why not. “The club has had to do certain things, but that is just the way it is,” he said. “There is no point anyone complaining about it.

“We showed last season that we are capable of beating just about anyone in the Championship. The last three months were very good, and most of the players that did that are still here.”

This post was first published at The Northern Echo