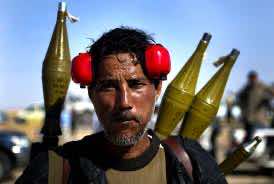 MISRATA, Libya  – A Qatari plane made a quick stop in the rebel-held Libyan city of Misrata on Saturday to offload ammunition destined for rebel fighters, sources with knowledge of the flight said.

Officials at the airport acknowledged a Qatari plane landed at Misrata airport but declined to reveal details of its contents.

“The plane offloaded six pick-up trucks which were packed with ammunition and minutes later it flew off again,” said one source, speaking on condition of anonymity.

Another source showed Reuters a photo of a plane shortly after its departure with “Qatar” written on underside of the fuselage.

Rebels seeking to protect Misrata and advance the 200 kilometres (125 miles) to Tripoli have been complaining of a lack of weapons and ammunition to effectively push forward to the capital.

France has previously air-dropped weapons and ammunition to rebels in western Libya.

Qatar has been one of staunchest supporters of Libyans seeking to topple Muammar Gaddafi from power.

Fighting is currently on the eastern outskirts of Zlitan, one of two major towns between Misrata and Tripoli which is firmly in the hands of the Libyan leader.

Taking Zlitan would be a major breakthrough in the war.