By Elizabeth A. Kennedy 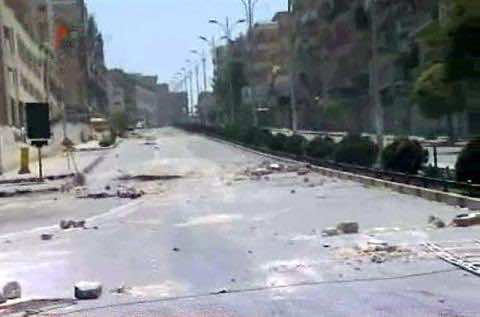 By Elizabeth A. Kennedy

The renewed violence in the eastern city of Deir el-Zour comes a day after at least 42 people were killed there in an intensifying government crackdown on protesters. The Local Coordinating Committees, which help organize the protests and tracks the uprising, said machine fire and artillery blasts resumed early Monday.

More than 300 people have died in the past week, the bloodiest in the five-month uprising against Assad’s authoritarian rule.

“The city was bombed by all types of heavy weapons and machine gun fire before troops started entering,” an activist in Deir el-Zour said, speaking on condition of anonymity for fear of reprisals.

“Humanitarian conditions in the city are very bad because it has been under siege for nine days,” the activist said. “There is lack of medicine, baby formula, food and gasoline. The city is totally paralyzed.”

The government’s crackdown on mostly peaceful, unarmed protesters demanding political reforms and an end to the Assad family’s 40-year rule has left more than 1,700 dead since March, according to activists and human rights groups. Assad’s regime disputes the toll and blames a foreign conspiracy for the unrest, which at times has brought hundreds of thousands of protesters into the streets.

The international community has sharply condemned the government’s crackdown, imposing sanctions and demanding an immediate end to the attacks. But in a sign of growing outrage, Syria’s Arab neighbors joined that chorus of criticism, voicing their concerns of a crackdown that intensified o the eve of the holy month of Ramadan – a time of introspection and piety characterized by a dawn-to-dusk fast.

Muslims typically gather in mosques during the month for special nightly prayers after breaking the fast, and the Assad government has been trying to prevent such large gatherings from turning into more anti-government protests.

After sunset Sunday, thousands of people poured into the streets in areas around Syria, including the capital Damascus and its suburbs, the village of Dael in the south, the central city of Homs, Latakia on the Mediterranean coast and northern city of Aleppo, according to the Local Coordination Committees. There were reports of shootings but no immediate word on casualties, according to the LCC.

Saudi Arabia’s king harshly criticized the Syrian government. King Abdullah said Sunday he was recalling his ambassador in Damascus for consultations, and demanded “an end to the killing machine and bloodshed.”

“Any sane Arab, Muslim or anyone else knows that this has nothing to do with religion, or ethics or morals; Spilling the blood of the innocent for any reasons or pretext leads to no path to … hope,” the king said in a statement.

Abdullah accused the Syrian government of a disproportionate response, and said it must enact speedy and comprehensive reforms to avoid a future of chaos.

The 22-member Arab League, which had been silent since the uprising began, said Sunday it is “alarmed” by the situation in Syria and called for the immediate halt of all violence, while the prime minister of Syria’s key trade partner and neighbor, Turkey, said he was dispatching his foreign minister to Damascus Tuesday to deliver a strong message about the crackdown.

On Saturday, the six-nation Gulf Cooperation Council criticized Syria’s “use of excess force.”

Assad has shrugged off months of criticism and sanctions, blaming armed gangs for the violence while offering reform measures that have failed to placate the protesters demanding sweeping changes.

In Deir el-Zour, which sits about 450 kilometers east of the capital Damascus, troops stepped up a siege that had already been going on for days. A pre-dawn raid on the city killed at least 42 people Sunday, said Abdul-Karim Rihawi, the Damascus-based chief of the Syrian Human Rights League, and Ammar Qurabi, who heads the National Organization for Human Rights in Syria.

An activist in the city told The Associated Press that the military attacked from four sides and took control of eight neighborhoods.