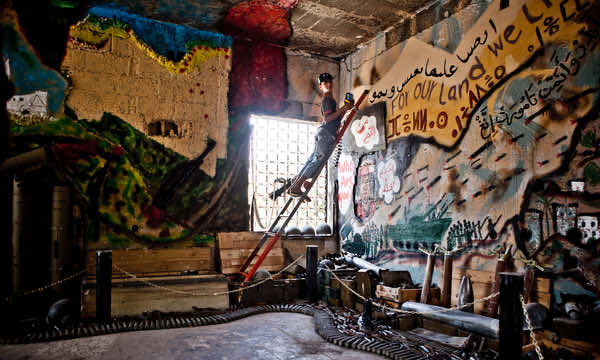 YAFRAN, Libya — In the evening, as the searing desert temperatures subside, the residents who have returned to this rebel-held city near the front lines appear on the streets. Some of them carry cans of paint, and begin to decorate murals with the characters of an ancient language that had been forbidden by the government of Col. Muammar el-Qaddafi.

The language is Tamazight, the tongue of the Amazigh, or Berbers, who, after decades of oppression in Libya are re-emerging as a political force.

As rebels have chased the Qaddafi military from much of the arid highlands in Libya’s west this spring and summer, Yafran has become the easternmost outpost of a cultural and linguistic reawakening that has expanded across the map, and it is expected to expand more.

Overlooking the Libyan desert plain, the city shows signs of a nascent sense of self-determination — a step, the Amazigh hope, toward full national and regional recognition.

“Before we were in darkness — we were invisible,” said Osama Graber, 36, an Amazigh mechanical engineer who is now an opposition fighter. “And now we can be seen, and are tasting freedom.”

No sooner had the Qaddafi forces pulled back from this city than its residents began reasserting their standing, even as the Qaddafi military lingered just beyond rocket range.

They followed a model seen in other traditionally Amazigh cities — including Nalut and Jadu — that have already broken free of the government’s grip. And they hope to build on gains realized by Amazigh people elsewhere, including in Morocco, which gave official standing to the language in June.

Classes in Tamazight are being held. An Amazigh security force has been formed. A local weekly newspaper, called Tamusna, for “wisdom,” has started to circulate in three languages — Tamazight, Arabic and English.

And Amazigh cultural and political leaders have framed a set of public demands for a postconflict Libya. As part of their vision, Tamazight will have an equal standing with Arabic, and Libya will become a parliamentary democracy based on a constitution grounded in tolerance and respect for human rights.

But with these high official aspirations, made possible by force, have come whiffs of revenge, which raise questions about whether the swift social reorganization gathering momentum in Libya risks fueling tensions that could undercut stability in the years ahead, or even lead to intractable internecine war.

After the Qaddafi military withdrew in early June, the houses in Yafran of the Mashaashia, a tribe whose members supported the Qaddafi government, were set upon and burned. Their occupants vanished from these mountains, apparently having fled. Many Amazigh residents say the Mashaashia are not welcome back.

The number of houses burned here is in dispute. Some say perhaps 15 or 20, others say more. The Mashaashia had a small presence in the city, which had a full-time prewar population of about 25,000, and the remaining residents say perhaps 150 of them were chased away.

The arson followed patterns seen in more densely populated Mashaashia areas, including the towns of Awaniya and Qawalish. Many Yafran residents say it was justified.

“These people, they were bad,” said a fighter, who gave only his first name, Hatam. “When the Amazigh families moved away from the fighting, they stayed and broke into homes, took things and killed our sheep.”

The Mashaashia households, other residents said, also provided sons who fought in pro-Qaddafi forces or offered intelligence and logistical support to government troops that besieged the mountains.

The attacks on the Mashaashia, however, seemed not to be directed only against the homes of those known to have sons in the military. Among the ruined houses were those once occupied by families whose connections to the government would seem of little consequence, including that of a widow and her children, who neighbors said were 13 and 16 years old.

Reprisals have been a source of embarrassment for the Transitional National Council, the de facto rebel authority, which has relied on Western support to survive. Officially, after prodding from Western diplomats, rebel leaders said that they would investigate the crimes and try to redress the grievances later.

“They are welcome back to their homes after the war, after we defeat the Qaddafi forces,” Jalal el-Digheily, the new rebel defense minister, said in an interview on Thursday.

But such declarations are not often echoed on the lands the Amazigh consider theirs. Years of oppression and months of bloodshed have hardened sentiments.

Even public officials are comfortable declaring that driving away pro-Qaddafi tribes aligns with a popular mood. One prominent Amazigh official, Gen. Ahmed Ismail el-Gul, who is Yafran’s police chief, was blunt.

With their enemies now gone from the city, the Amazigh have been slowly restoring life to Yafran. One resident, Yousef Grada, 35, has been cleaning the city, block by block.

Mr. Grada ran a small shop before the war. During the two-month guerrilla effort to chase the Qaddafi soldiers from the city, he was a fighter. He first went to combat, he said, with a meat cleaver, but eventually obtained a captured assault rifle.

Once the Qaddafi forces pulled back, he said, he set aside the blade and the rifle and formed a volunteer cleaning crew. First, he carried away the accumulated garbage and the city’s carpet of spent machine-gun cartridges.

Lately, he has been painting the city’s walls, street by street, which are then decorated with revolutionary and Amazigh murals. He said he was waiting for the end of the war, and full legal recognition. “I am expecting good things,” Mr. Grada said.

A few blocks away, at a former government building that has become a revolutionary exhibit, the main artist, Abdul Ghassem, said the Amazigh revival should not harm other Libyans or be seen as a yearning for separatism.

“We are not looking for our own country,” he said. “We are all Libyans. All we want is our rights.”

A doctor at the Yafran hospital said that kind of feeling has made the Amazigh sense that the currents of war and history are now making long-suppressed dreams feel possible. But his own fears — he declined to give his name because, he said, he was worried for the safety of relatives in Tripoli — underscored how treacherous life in Libya remains.

He said he was concerned that tensions between tribes and ethnic groups, long exploited by the Qaddafi government’s patronage system and now one of the dividing lines in this war, could create cycles of resentment and violence that could be hard to calm after an ouster of the Qaddafi clan.

“Absolutely we are worried. People have to learn that getting our rights does not mean threatening other people’s rights,” the doctor said in an interview at the hospital, which is not far from some charred remains of what, until June, had been Mashaashia homes.