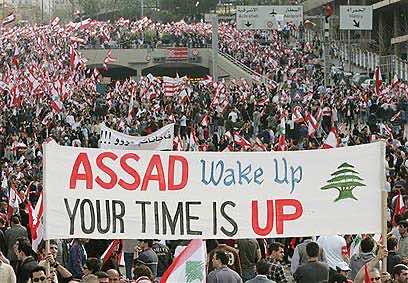 Egyptian Foreign Minister Mohammed Amr on Tuesday said he feared that revolt-hit Syria was “heading to the point of no return”.

He called for an immediate end to violence, the official news agency MENA reported.

Amr called for an “immediate end to shootings,” adding that “reforms that are soaked in the blood of the martyrs who are dying daily are of no use,” the agency reported.

Amr called for a dialogue that would include “all segments of Syrian society” to help put an end to nearly five months of a deadly crackdown by the Syrian authorities on pro-democracy protesters.

His comments came as Syrian President Bashar al-Assad said his forces will pursue “terrorist groups” blamed for the unrest in this country, where activists said Tuesday’s death toll cost at least 25 lives.

“We will not waver in our pursuit of terrorist groups,” Assad told visiting Turkish Foreign Minister Ahmet Davutoglu, according to Syria’s state news agency SANA.

Davutoglu met with the embattled Syrian leader in Damascus earlier in the day to deliver a message that Ankara has “run out of patience” with the crackdown.

Assad has come under growing regional isolation in recent days with Arab leaders urging him to put an end to the bloodshed and as rights group say more than 2,000 have been killed in the crackdown since mid-March.

On Monday Kuwait and Bahrain withdrew their ambassadors from Damascus, following in the steps of Arab heavyweight Saudi Arabia, in moves welcomed by the United States.

Washington has said it is “encouraged and heartened” by the tougher Arab stand on Syria.

The recalls have increased the regional isolation Asad, whose government has also come under criticism for its deadly crackdown on protesters from the Arab League.

Arab League chief Nabil al-Arabi on Sunday urged the Syrian authorities “to bring an end immediately to acts of violence and campaigns by the security forces against civilians.”

And Al-Azhar, the top Cairo-based Sunni Muslim authority, on Monday called on Syrian authorities to “immediately end” the bloodshed, saying that the crackdown on protesters is a “tragedy” that has gone too far.