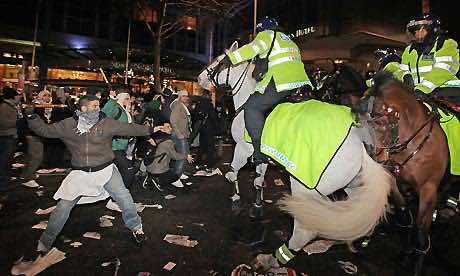 Perhaps the whole point of a riot is to defy explanation: it’s an eruption of the irrational, a shattering of glass and boundaries, a testosterone-fueled roar that briefly flips anger and emptiness into something like ecstasy. What’s in the minds of the young men (and women, too) in London, Birmingham, Bristol and Liverpool who’ve sent great sheets of flame rising into the August night, devouring local businesses that it took years to build; who’ve turned plate glass to spiderwebs with one crack of a brick; who’ve gone home with their backpacks stuffed with cell phones, Nike trainers, X-boxes and Wiis? Well, wouldn’t we like to know, we middle-class types with access to a blog and an analysis, a “network” and a future?

Today Prime Minister David Cameron and London Mayor Boris Johnson returned reluctantly from their  vacations to confront the arson and looting that have spread through Britain’s cities over the last three nights, like a pair of Eton prefects summoned to contain the fifth form. Parliament has been recalled for the second time this summer (the first was over phone hacking by Murdoch’s News International); 450 people have already been arrested; Cameron has promised 6,000 more police on London’s streets this evening. But will it be enough?

Missy, who works at a small shop selling jeans and sneakers down the road from where I live, shrugs when I ask her what she’s going to do tonight. The metal grille was down and properly locked yesterday; “they” trashed the place anyway. “They know the shop,” she says. “They went straight upstairs where we keep the expensive stuff, the £300 jeans.” A few blocks on, outside a smashed-up cycle shop where twisted bikes lie like skeletons on the pavement, a forensic expert carefully dusts glass with fingerprint powder. Does she think she’ll find anything? Another shrug. In Dalston, next to Hackney which saw some of the worst rioting, the Turkish Kurdish community have taken charge themselves, standing guard outside their shops, some of them with baseball bats.

The blue touchpaper that lit the conflagration was the killing of Mark Duggan, a 29-year-old black father of four, by armed police in Tottenham, one of London’s poorest boroughs, as he rode in a minicab; he had a handgun but there’s been no claim that he made a move to fire it. A small crowd of local residents gathered at the police station to demand explanations; though the protesters were peaceful, the police were not forthcoming. By nightfall, against the wishes of Duggan’s relatives, rioting had broken out in Tottenham and elsewhere. Police cars and a double decker bus were set on fire and shop windows were smashed, mostly by teenage boys.

What began as an outburst of anger against police violence soon morphed into an orgy of nocturnal “shopping” as kids broke into sports and electronics shops, cellphone stores and supermarkets. A brave woman in Hackney gave a streetcorner sermon amid heaps of litter, excoriating the rioters for turning grief to greed: “This is about a fucking man who got shot in Tottenham. This isn’t about having fun on a riot and busting up the place. Get real, black people, get real. If we’re fighting for a cause let’s fight for a fucking cause.” But in the deprived neighbourhoods of Britain’s crumbling cities, consumerism is a more accessible dream than commitment or community.

And so it has gone on, night after night since then, frightening, unpredictable and uncontainable. The police are overwhelmed; the politicians nervously continue to plough their furrows. “Sheer criminality,” says Home Secretary Teresa May, as if any attempt to understand what’s at the root of all this rage would imply condoning it. Labour politicians flirt with the temptation to blame government spending cuts, as if such fury could build up in a matter of mere months. Of course the cuts don’t help: they are the final straw, the irrefutable evidence that the poor are now dispensable, outside society. Nor does the larger sense that nobody’s in charge, that the economy’s in freefall, that bankers have been looting the public purse for years, and that our leaders have no idea what to do about any of it. There is a doomsday feeling on the streets of London: time to grab what you can, burn it down and live for now, because who knows what’s coming for us all tomorrow.

But it’s taken years to brew the toxic mix of hopelessness, frustration and disenfranchisement, envy, anger and boredom, greed and selfishness, humiliation and recklessness that’s erupted in Britain this week–years in which the gap between rich and poor grew wider, racism was allowed to fester, consumerism and celebrity culture replaced community. While we in the middle classes got on with our oh-so-busy lives, averting our eyes from the poverty just a few blocks away, sending our kids to schools where there are other “motivated parents,” talking politics, we allowed the rifts in our own neighbourhoods to deepen until they became almost unbridgeable.

This morning, down the road, people stared at the broken shops, shaking their heads in disbelief. “It’s mad,” they said. “Just mad.” Small groups of women set out with brooms and dustpans to sweep up the broken glass. There is a kind of solidarity taking shape, a wish to protect what we have, now that it’s under threat. People are talking to each other, asking if everything’s all right. The challenge, when all this dies down, will be to stay awake, to keep on doing that, until solidarity spreads.