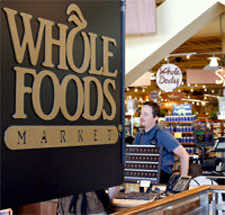 In the current era of Islamophobia, anything remotely “Muslim-ish” touches off paranoid delusions of impending jihad, particularly when it involves American emblems — like Whole Foods. Last week, the suburban staple decided to tout “Saffron Road,” a new line of Halal-certified frozen food, to coincide with the Muslim holiday of Ramadan. Halal foods are items permitted under Islamic dietary guidelines. In a post on the company’s website entitled “What’s this halal about,” Whole Foods offered a chance to win free samples because “whether you eat halal because of your religious dietary guidelines or you simply prefer to choose food that’s made with high-quality, responsibly farmed ingredients, then Saffron Road has some tasty offerings for you.”

It seems that a “very small” contingent of consumers and right-wing bloggers simply preferred to throw an apoplectic fit. Thus, in apparent genuflection to this bloc, Whole Foods sent an email to all its U.S. stores specifically telling the franchises not to promote Ramadan this year. The Houston Press obtained a copy of the email:

“It is probably best that we don’t specifically call out or ‘promote’ Ramadan,” reads a portion of that email. “We should not highlight Ramadan in signage in our stores as that could be considered ‘Celebrating or promoting’ Ramadan.”

This reversal marks “a significant departure from years past, when Whole Foods has promoted its halal items during Ramadan with small signs that displayed a crescent moon, the symbol of Islam.” What’s more, the move is hardly likely to placate the small number of fringe bloggers who are already boycotting the chain for “pimping and promoting–’Canaan Fair Trade’ and ‘Palestinian Fair Trade’ Olive Oil.” But given the conservative credentials of Whole Foods owner John Mackey, perhaps its surprising the company even considered recognizing Islam in the first place.

Whole Foods responded that the company has not stopped the campaign. It states it is still highlighting halal but also maintained it is still “not specifically [promoting] #Ramadan after some negative comments.” In any event, as Gawker notes, the whole episode does serve as a kind of flow chart for future faux-controversies: “Are you a racist xenophobe who dislikes anything at all for any arbitrary reason? Simply complain loudly on your blog, and Whole Foods will obsequiously cater to your every last prejudice.”