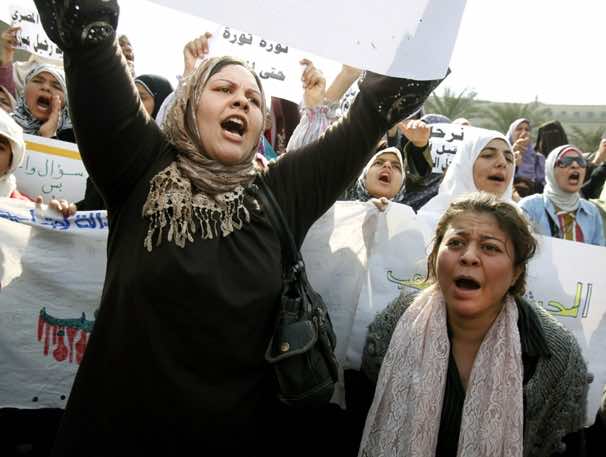 CASABLANCA,  – Since the beginning of protests in Morocco on Feb. 20 women have been at the vanguard. Many of the spokespersons of the protest movement have been women – observers and activists see this as a new phase of feminine emancipation in this North African country.

“We have waited enough. Women now are out to say it is time for justice to be made,” Safaa Ferradi, a local activist, told IPS.

“The great majority of women present in our movement are of a high cultural and academic level,” Rabah Nouami, a local leader of the 20th February movement in Casablanca, told IPS. “It is so honourable to see that most of the spokespersons on behalf of the movement are women. But women are not still influential at the level of decisions within the movement.”

In spite of the efforts made by the State and by civil society, women remain victims of violence and discrimination.

An official study by the government High Planning Commission showed that four forms of violence are still inflicted on Moroccan women – “physical, sexual, psychological, and economic.”

The new family code in this country of 32 million people came into effect in 2004. It gave women the right to divorce, to marry without paternal permission, as well a right to alimony in the case of divorce. The new code did not give women equal inheritance rights.

The problem, it seems, is not the legal texts “but the implementation of these texts,” Fatima Bouhraka, a writer on women issues, told IPS. The strongest resistance to women’s rights is cultural, according to Bouhraka. Moroccan culture considers “the man as the one who commands and who must be always obeyed.”

This culture is strengthened by other factors “like poverty and the ignorance of everyone’s rights and duties,” Taoufiki Belaid, a member of Amnesty International (AI), told IPS. Women who are victims of violence, as well as their attackers, “ignore their rights and duties,” Belaid said.

This does not mean that there are no actions being taken to increase awareness about women and their rights. Abderrahim Messoudi, who has been organising workshops about the issue in universities with a group belonging to the Moroccan Human Rights Association (AMDH), told IPS that the problem is the minimal participation of women themselves in such activities.

Women’s indifference towards the actions of civil society is due, according to independent feminine activists, to the perception that these actions are biased. “There is no real civil society. Everybody tries to manipulate the feminine cause according to his own interests,” Ferradi said.

In Morocco, unhappiness with political parties is not a new thing. Only 37 percent of the electorate participated in the last general election in September 2007.

New electoral measures in Morocco call for women to occupy at least 30 of the 326 seats in parliament. But this does not satisfy Moroccan activists. “The parliament and the government will both stay mainly masculine,” Bouhraka said.

According to a study by the High Planning Commission carried out in 2010, women represent only 25 percent of the working population. Women are also disproportionately illiterate – more than 50.8 percent of Moroccan women cannot read and write.

Violence, economic and social discrimination have led women to the streets to protest under the colours of the Arab Spring. “Our demands are freedom, equality, and human dignity,” Ferradi said. “In our movement demands are equal for both women and men,” Nouami explained.

The new Moroccan constitution, approved Jul. 1, calls for a project to create equal sharing between men and women. But, “in Morocco, the brandished slogans are a one thing, reality is another,” Bouhraka stressed. “There are discreet hands which hinder any law favourable to the country and to the people.”