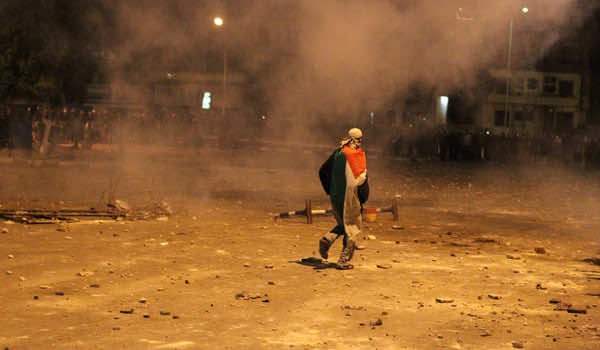 BEIRUT, Lebanon — In the Palestinian refugee camp of Shatila, a corner of Beirut bearing the scars of massacres and an enduring despair, the words of a young barber hinted at an emerging optimism about what the Arab revolts could mean for a central issue of the last half century in the Middle East: the fate of Palestinians.

The barber, Mohammed Assad, was not naïve; life here is too grim for that. But in a region whose politics are being recalculated, he celebrated the rising influence of popular will on governments that long ignored it.

In all the tumult of the Arab revolts, one of the most striking manifestations of change is a rejuvenated embrace of the Palestinian cause. The burst in activism in Egypt, Lebanon and even Tunisia has offered a rebuttal to an old bromide of Arab politics, that authoritarian leaders cynically inflamed sentiments over Israel and Palestine to divert attention from their own shortcomings.

But the embrace of the issue also helped confirm its status as a barometer of justice and freedom for many Arabs and Muslims. And now, the demands of an empowered public raise the possibility of a significant change in the region’s foreign policies which, at least tacitly, capitulated to the dictates of the United States and Israel.

“We always said, ‘If you want to liberate Palestine, you need to liberate yourselves,’ ” said Gamal Eid, founder of the Arabic Network for Human Rights Information, in Cairo.

In Tunisia, activists have insisted on an article in the Constitution banning normalization with Israel and making support for Palestinians state policy. Through a vibrant social media network, Lebanese and Palestinian youths have organized marches and sought ways to have a greater say in decisions of the Palestinian leadership. Protesters in Egypt have urged officials to let boats sail from Egyptian ports to break the partial blockade against Gaza; one boat docked in Alexandria last month before the Israeli military boarded and seized it.

“Even if the revolutions fail to achieve full and thorough regime change, there is no Arab government that can ignore its people now,” said Rashid Khalidi, a professor of modern Arab studies at Columbia University. “All the rulers — the kings of Morocco and Jordan, all the dictators and all the autocrats — they’re scared blind of their own people.”

All across the region, popular uprisings have most insistently looked inward, at issues of democracy, social justice and dignity. But for many, dignity is a notion defined both individually and collectively. And even in the most idealistic moments of the Arab revolts, the weakness of their own governments was often a focus of protesters’ ire. In Tahrir Square in Cairo, anger at America and Israel was less pronounced than resentment of the subservience of Egyptian leaders to their policies, namely the blockade of Gaza.

The Foreign Ministry in Egypt now calls the Gaza blockade “shameful.” The reconciliation agreement signed in May in Cairo between bitterly opposed Palestinian factions was a direct consequence of the fall of President Hosni Mubarak. Even at the United Nations, bracing for a debate in September over whether to admit a Palestinian state as a full member, advocates evoked the Arab revolts as the appropriate context for an end to an Israeli occupation of Palestinian lands that has lasted 44 years.

“We hope that Mr. Netanyahu can listen to the wisdom of the voices of the leaders who are now moderate,” said Mohamed Bassiouni, a former Egyptian ambassador to Israel and one of the loudest voices here for warmer ties, referring to Benjamin Netanyahu, Israel’s prime minister. “Don’t miss this golden chance because you don’t know what will come if there is democracy, because democracy means listening to the people.”

The Palestinian cause has long served as an arena for manipulation by Arab governments, and popular reverence for the issue is rarely mirrored in the treatment of Palestinians in Arab countries, particularly in Lebanon, where refugees lack basic civil rights. But this issue retains an emotional pull across the region, heightened by a new sense of Arab identity inspired by the revolts.

Many surveys routinely find that the Israeli occupation is considered the biggest obstacle to peace and stability in the region. American interference is often listed as a close second.

In a tent in Tahrir Square with a Palestinian banner and a sign that read “Jerusalem will soon be back,” Mustafa Hesham, a 22-year-old with a narrow patch of beard on his chin, said he was “arrested and humiliated just because I support the Palestinian cause.”

“After the revolution that won’t happen again,” he said.

Activists in Beirut organizing a weeklong program of lectures, speeches and concerts on the conflict in March recalled refreshing news Web sites every 15 minutes and watching Al Jazeera, as the climactic events in Egypt unfolded. “Please, put it on mute,” one of the activists, Zaynah Hindi, recalled saying. “We have to work.”

Though Ms. Hindi called the revolts’ impact more inspirational than practical, she celebrated the idea that “it showed there was potential for something big to happen.”

Activists say the marches in May of thousands of Palestinians in the West Bank, Gaza, Lebanon and Syria to the boundaries of Israel were an unprecedented show of what one analyst termed “autonomous mobilization.” Israeli soldiers killed 14 Palestinians, and factions and governments, in particular Syria and its allies in Lebanon, may have manipulated the events, providing crucial logistical support.

But the marches signaled an activism that rose from below, carried by word of mouth and new technologies, rather than solely from the dictates of traditional leaderships. Those older Palestinian leaderships themselves have come under pressure lately from activists seeking to reform them in a way that makes them more representative and accountable.

“There was energy around it, and there was excitement in the air,” said Andrew Dalack, an activist who has worked with Palestinian refugees in Lebanon. “People didn’t seem to be fazed by the fact that this was an unprecedented move or unprecedented action because they saw unprecedented acts in Egypt, Libya and Yemen.”

In Shatila, its misery knitted into the fabric of Beirut, a poster hung in January that read, “Martyrdom is life,” around the corner from a shack selling a T-shirt emblazoned with Al Pacino’s visage from “Scarface.” Sentiments here often feel as sullen as his character. Today, another poster commemorates the May 15 march to the border. “So as not to forget,” it reads, in words that feel more expectant than vengeful.

“We’re still thinking the path ahead of us is going to last 200 years,” said Younes Shantaf, a 42-year-old resident scarred by four gunshot wounds in Lebanon’s civil war.

But a neighbor seemed to find hope in all the tumult.

“It was always an issue with the Arab regimes,” said Osama Ghazlan, sitting amid the cinder blocks of permanent transience. “The people have always stood with us.”