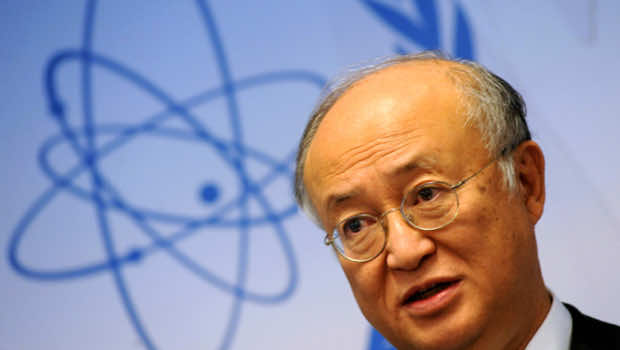 VIENNA – Following more than a decade of diplomatic maneuvering, Israel and Arab nations have tentatively accepted an invitation by the U.N. nuclear agency for preliminary talks on a Middle East free of nuclear weapons, in correspondence shared with The Associated Press.

Israel is commonly considered to be the only Middle East nation with atomic weapons — and its secretive nuclear program has long been a heated subject of contention with Arab neighbors.

Letters from Egypt and Israel and passages from a letter from Syria reflect a willingness to meet. But whether the talks take place may depend on willingness to compromise on preconditions.

The Arabs have urged Israel to open up its secretive nuclear program to international inspection. Israel in turn says the proposed talks should not be construed as nuclear negotiations.

Reflecting the sensitivity of the issue, a statement from the office of Israeli Prime Minister Benjamin Netanyahu said Wednesday that Israel’s reported willingness to discuss a nuclear weapons-free Middle East “is not correct.”

But in a May 2 letter made available to the AP, Shaul Chorev, head of Israel’s atomic energy commission, told International Atomic Energy Agency chief Yukiya Amano that “Israel is ready to cooperate with you” with his efforts to convene talks on “the experience of other regions … relevant to the establishment of a NWFZ” — a nuclear weapons free zone.

The official and members of other delegations describe the chances of success as possibly the best since 2000. That was when IAEA nations first asked the agency to convene such talks.

An official from a delegation accredited to the International Atomic Energy agency says Amano planned to meet with the Arab group on Sept. 5 to try to bridge differences. He and others spoke on condition of anonymity because their information was confidential

Amano himself attaches high importance to the meeting — despite its relatively modest scope, focusing only on “the potential relevance” to the Middle East of nuclear-free zones elsewhere in the world. He told the AP that the talks would be “a very rare and good occasion in which all parties concerned can discuss their issues.”

Israel’s presumed nuclear power status and constantly flaring Mideast tensions have made any talks the Jewish state and Arab countries a rarity since the mid-1990s, when regional peace negotiations broke down.

But a decision last year by the 189 members of the Nuclear Nonproliferation treaty to convene a U.N.-sponsored conference on establishing a Middle East nuclear-free zone appears to be working as an incentive for the region’s Muslim nations to meet this year with Israel for the exploratory Vienna talks.

Arab countries and Iran are aware of the potential of using the 2012 U.N. conference as a platform to pressure Israel to fulfill their long-standing demands: joining the nonproliferation treaty, acknowledging that it has nuclear weapons and allowing IAEA inspectors to probe their atomic activities.

Israel is unlikely to do any of that. It remains unclear whether it will even attend the 2012 talks and Chorev, the Israeli nuclear chief, emphasized in his response to Amano’s overture that his country views any Vienna meeting as “solely an informational and discussion event and not a forum for negotiations.”

Egyptian Ambassador Ehab Fahwzy drew a clear link between the proposed 2012 conference and the Vienna talks. In his letter to Amano shared with the AP, he said such talks “acquire added significance” in the wake of the decision to hold next year’s gathering.

Newfound Arab and Iranian willingness to sit at the same table with the Jewish state was already reflected in a little-publicized closed-door meeting convened in Brussels by the European Union last month, where the two sides exchanged views on nonproliferation and confidence-building.

Even Syria appears ready to compromise, despite traditionally stormy relations with Israel exacerbated by Israel’s 2007 air strike that destroyed what the IAEA says was a nearly finished secret nuclear reactor capable of producing plutonium. Its conditions, cited by an official who has seen them, are vague, stressing only “the need for the parties wishing to establish a nuclear free zone in the Middle East to implement international obligations and ratify the relevant treaties.”

Officials familiar with the proposed Vienna talks said Tuesday that Iran had still not indicated whether it would attend. An AP email to Ali Asghar Soltanieh, Tehran’s chief representative to the IAEA, was not answered by Wednesday.

The official who had seen the Syrian letter said that Arab representatives were considering attending the talks even if Iran refuses. That would represent a breach of Mideast Islamic solidarity in dealings with Israel and likely exacerbate tensions between Shiite Iran and its mainly Sunni Arab neighbors.