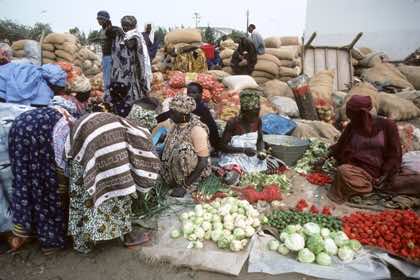 Once every few years or so, the world goes through a familiar ritual: various factors converge to trigger unusual increases in global food prices. In response, countries rush through emergency measures to ward off widespread shortages or worse. Prices stabilize, calm returns and the world declares yet another victory in the war against rising food prices. The crisis vanishes from the radar — until the next one.

No wonder few are surprised that for the second time in three years, another crisis is upon us. In February the UN Food and Agriculture Organization (FAO)’s food index, which tracks monthly changes in the global prices of staple foods, reached its highest level ever.

While the FAO’s index was shattering records, the World Bank announced that some 44 million people in developing countries had been thrown into poverty by rising food prices since June 2010, gravely affecting the most vulnerable, who spend more than half their money on food.

A report released in May by Oxfam, a British charity, paints a gloomy picture. It predicts that food prices will more than double in the next 20 years unless the global food system is overhauled. The report, Growing a Better Future, forecasts price increases in the range of 120–180 per cent “as resource pressures mount and climate change takes hold.”

Oxfam’s predictions are in line with projections by the US-based think-tank International Food Policy Research Institute (IFPRI), which show similar increases over the same period. José Graziano da Silva of Brazil, the newly elected FAO head, told reporters in June that “food prices would remain volatile for some time.”

Without a doubt, Africa’s poor suffer the most from high food prices, as they rely on a few staple crops for survival. This year the Horn of Africa is facing its worst drought in 60 years, according to the UN Office for the Coordination of Humanitarian Affairs. Millions of people in Djibouti, Ethiopia, Kenya, Somalia and Uganda will face severe food shortages. Oxfam’s assessment of the sub-region is equally pessimistic, identifying it as one of the world’s “food insecurity hotspots” already struggling to feed their people. According to the UN World Food Programme (WFP), millions more are threatened with starvation in eastern Mali, northern Cameroon, Chad and Niger (see Africa Renewal Online).

So far much has been learned about the causes of rising food prices. Yet world leaders have avoided a head-on tackle of the system’s underlying weaknesses, which include low investment in agriculture, especially for smallholders; an end to huge land purchases by the rich; lack of transparency and fairness in food markets; and disputes over climate change. Each time a crisis strikes, they have instead tinkered at the edges of a broken system or employed makeshift measures.

“Unfortunately, it is a general trend in the world,” complained Jacques Diouf, the outgoing FAO chief (whose term ends in December), frustrated by world leaders’ failure to heed his warnings of imminent shortages during the 2008 crisis. “We react when the crisis is already here.”

Arguably, the national interests of the major food producers have so far paralyzed efforts to reform global agricultural policies. For example, the first-ever gathering of ministers of agriculture from the Group of 20 (G20) — an informal grouping of leading economies that includes South Africa as the sole African member — failed to reach an agreement in June on policy issues.

The Paris talks deadlocked on the use of biofuels and export bans. Food experts worry that biofuel policies divert crops from food markets to the production of ethanol and biodiesel. And export bans, imposed by governments to ensure adequate stocks at home by restricting farmers from exporting food to other countries, distort global markets. The best the G20 ministers came up with was an agreement to create a global database to measure the supply, consumption and stock of rice, maize and wheat, and to exempt humanitarian purchases by the WFP from export restrictions.

This setback was the latest in a string of fruitless attempts to reshape the global food system. Before the G20 meeting Oxfam angrily noted in announcing the release of its food security study that “the failure of the [food] system flows from failures of government — failures to regulate, to correct, to protect, to resist, to invest — which mean that companies, interest groups, and elites are able to plunder resources and to redirect flows of finance, knowledge and food.”

While the wrangle over how to end food crises persists, there are fewer disputes about its causes. These range from the simple to the contentious. Bad weather has reduced grain exports from Australia. Export bans by food exporters — 21 countries at the beginning of the year — continued subsidies to farmers by rich nations and market speculation have all distorted the supply and price of food on global markets. Subsidies encourage farmers to overproduce and thus depress market prices, forcing farmers in poor countries to compete with cheap food imports. Analysts also blame commodity traders for contributing to spikes in global prices through speculation.

In addition, lack of investment in agriculture and inefficient farming contribute to food shortages in Africa. About 40 per cent of Africa’s farm produce is lost on the way to market, notes The Economist, a British weekly. In some areas, such as western Kenya and northern Ethiopia, families have less than the minimum farmland required to support a household. Lack of land titles, access to credit and property rights, especially among women, limits the amount that can be harvested from small plots, observes the magazine.

Yet rather than causing despondency, perennial food shortages have emboldened food experts and antipoverty activists to press harder for a better system. Robert Townsend, an economist with the World Bank, argues that better seeds, more fertilizer and improved methods of cultivation increase harvests. In Benin, for example, the Bank’s Global Food Crisis Response Programme has supplied fertilizer, which boosted cereal production by an additional 100,000 tonnes. Mr. Townsend also calls for more investment in research to develop improved varieties, as well as well-managed irrigation schemes to ensure reliable water supply.

A continent-wide initiative by the African Union to spend more money on agriculture is also showing encouraging results. Dozens of countries — 26 and counting — have signed agreements under a plan called the Comprehensive African Agricultural Development Programme, run by the New Partnership for Africa’s Development (NEPAD), the AU development agency. Signatories are required to increase spending on agriculture to at least 10 per cent of their budgets (see Africa Renewal, April 2011).

The results in some countries have been remarkable. Rwanda, which in 2007 became the first to adopt the programme, increased land allocations to maize almost fivefold in three years. As a result, maize yields rose by more than 212 per cent over the same period — from less than 0.8 tonnes per hectare to 2.5 tonnes. Malawi has also seen comparable successes, along with Sierra Leone and Tanzania, among others.

Equally important is the need to end the gender imbalance. Giving rural women the same access as men to land, technology, financial services, education and markets, argues FAO in its State of Food and Agriculture 2010–11 report, will increase agricultural production and reduce the number of hungry people by up to 150 million worldwide.

There is no doubt that the pace of overhauling the global food system will be painfully slow, with modest progress at best. This will guarantee repeated food crises. Responding to the failure by the G20 to reach an agreement on agricultural policies, Oxfam noted that the group’s “sticking plaster approach falls well short of the major surgery” needed to tackle the global food system’s maladies. As with a festering wound left untreated, failure to act now will only hasten the inevitable -a visit to the surgery room.

*This article has been published in cooperation with the United Nations publication Africa Renewal.