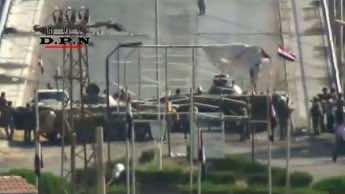 European members of the UN Security Council stepped up their rhetoric on Syria Wednesday, calling for tougher action against Damascus as it resists international calls to end a deadly crackdown on five months of anti-government protests.

European members of the Security Council on Wednesday threatened Syria that it could face tougher U.N. action if it continued a bloody crackdown on protesters, while Russia urged Damascus to implement promised reforms as soon as possible.

But veto powers Russia and China, backed by India, South Africa and Brazil, have vehemently opposed the idea of slapping U.N. sanctions on Damascus, which Western diplomats say would be the logical next step for Syria.

Council diplomats said there were no signs that the five so-called “BRICS” nations have altered their positions despite the five-month-old crackdown by Syrian security forces on protesters in cities across the country.

Envoys of Britain, France, Germany and Portugal spoke to reporters after a closed-door session of the 15-nation council convened to assess Syria’s compliance with last week’s call by the Security Council for “an immediate end to all violence.”

They said Damascus has ignored that demand.

Britain’s Deputy U.N. Ambassador Philip Parham suggested to reporters that if Syrian President Bashar al-Assad continued to ignore calls from the Security Council for an end to the clampdown, Damascus could face U.N. sanctions.

“If they continue … along their current path and they fail to heed those calls, then we believe the council must look at taking further steps to keep up the pressure on the Syrian regime,” Parham said.

US envoy Rice: Assad should go

Parham’s counterparts from France, Germany and Portugal echoed his warning that further steps—which is often diplomatic code for sanctions—would have to be discussed.

U.S. Ambassador Susan Rice told reporters earlier that “it would be much, much better for the people of Syria, and Syria would be better off, without Assad. » She was echoing comments made last week by White House spokesman Jay Carney.

Rice told the Security Council that the United States “is working together with its international partners to bring greater pressure to bear on the Syrian regime through further coordinated diplomatic and financial measures.”

“We are also working with our partners to stem the flow of the weapons and ammunition that Syrian security forces, under Assad’s authority, continue to use against peaceful protesters,” she said, according to the text of her remarks.

The Security Council will take up Syria again next week.

Russian Ambassador Vitaly Churkin said Moscow had made clear to Damascus that it wants Assad’s promised reforms implemented as swiftly as possible.

“What we are telling them is that they need to have serious reforms as soon as possible, even though we do realize that it takes time, especially in a dramatic situation like this, you simply cannot carry out reforms overnight,” he said.

Asked if he thought new U.S. sanctions against Syria announced by Washington on Wednesday were helpful, Churkin said, “No.”

Syrian envoy Bashar Ja’afari blasted the Europeans, accusing them of misleading reporters about the situation.

“They tried to manipulate the truth and to hide important facts and elements related to the so-called situation in Syria,” he said, adding that the Europeans had deliberately ignored Assad’s promises of reform and national dialogue.

“To hear the prime minister of England describing the riots and the rioters in England by using the term ‘gangs’, while they don’t allow us to use the same term for the armed groups and the terrorist groups in my country,” he said. “This is hypocrisy. This is arrogance.”

Parham dismissed Ja’afari’s comparison between the riots in Britain and the violence in Syria as “absurd.”