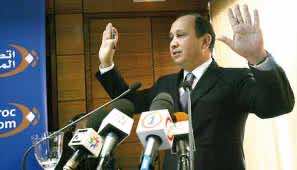 The Moroccan government on Friday cancelled for the second time in less than a year a tender for the sale of part of its 30-percent stake in Maroc Telecom , bankers familiar with the matter said.

The revival of the stake sale has prompted opposition parties, mostly from the Islamist Justice and Development Party (PJD), to summon Finance and Economy Minister Salaheddine Mezouar to parliament for explanations.

The finance ministry on Friday notified financial firms that were invited to bid, advise on and lead the sale of a 7-percent stake that the tender, launched on July 18, had been cancelled.

“They did not explain the decision. We are being taken for little kids,” one of the bankers said.

Officials at the ministry declined to comment while Mezouar could not be reached immediately.

A multi-billion dollar spending push by the state to avert any spillover from revolts rocking the Arab region has eroded Morocco’s public finances and raised concern over its ability to fund key projects at a time when it was struggling to cope with high oil and grain prices.

It has forced the government to sell assets that have so far netted 6 billion dirhams this year and revive plans to sell the telecom stake worth at least $1 billion. For details see

The International Monetary Fund (IMF) expects Morocco’s budget deficit to reach about 5.7 percent of this year’s gross domestic product versus 4.5 percent in 2010 when it reached 35.1 billion dirhams ($4.4 billion).

“The sale’s cancellation is a return to reason,” said Lahcen Daodi, a prominent member of PJD. “Why should we sell treasured assets to pay for this government’s blunders?” he asked.

After endorsing a new constitution that was crafted by the royal palace, Morocco plans early parliamentary elections, from as early as October.

Mezouar heads the National Rally of Independents (RNI) party that was founded in the late 1970s by an uncle of King Mohammed.

At a rally earlier this month, Mezouar said his party aims to take 20 percent of seats in the parliamentary polls, a result that would qualify him to take the job of prime minister in the next government.